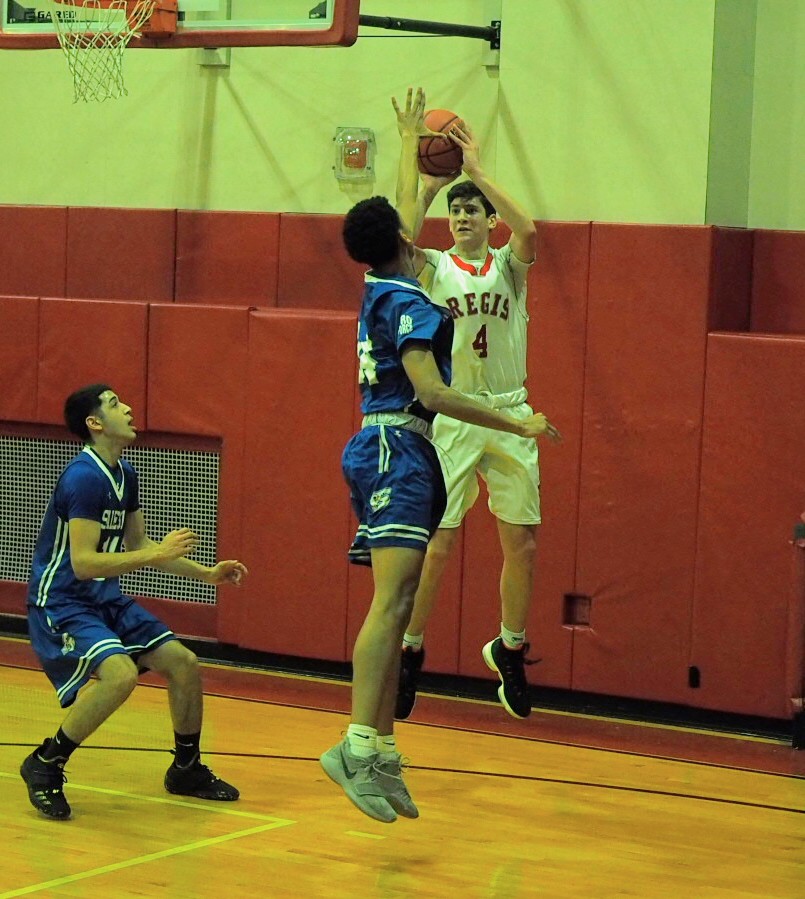 William Eastwick scored 21 points and Joe Manfredi added 17, as Regis pulled away from Salesian in the second half to hand the Eagles their first league loss of the season in CHSAA B action in Manhattan on Friday night. The Raiders connected on nine 3-pointers in the game, four by Eastwick and three by Andy Vittoria, breaking the game open in the third quarter by outscoring Salesian 20-7.

The defending CHSAA B Division Champs looked very much capable of defending their title, consistently finding the open man with solid ball movement and sharp passing.

Manfredi had the hot hand early, scoring 8 points in the first quarter and putting Regis ahead 13-4 with a steal and runout layup. Salesian regrouped after a timeout, getting baskets from Mark Nilaj and Nokio Kennedy to trim the margin to 15-11 before a layup by Eastwick off a post pass by Vittoria made it 17-11 at the end of the first.

Salesian stayed within striking distance throughout the second quarter, pulling within three at 22-19 on a 3-pointer by Kennedy and again at 25-22 on a 3-pointer by Joel Garcia, but the Eagles still struggled to get stops on defense.

After holding a 30-25 halftime lead, the Raiders opened the third quarter on a 6-0 run, taking their first double digit lead at 36-25. Salesian's offense suddenly sputtered, and Regis started to score in transition, stretching its lead to 44-29 on a runout layup by Eastwick and 46-31 on a layup by Breandan Quill off a long pass by Conor Nicholson. Chris Murray's and-one basket in the post made it 48-31, and Eastwick's putback off the missed free throw gave Regis a comfortable 50-31 cushion with less than a minute to play in the third.

The lead ballooned to 59-36 on a 3-pointer by Quill at the 5:40 mark, essentially putting the game out of reach.

The Raiders, now 3-0 and 7-1, have a non-league game against Portledge on a neutral court on Sunday and will then host Cathedral on Tuesday in their next league contest.

Salesian will get another shot at Regis on February 8th, when the Raiders visit New Rochelle.