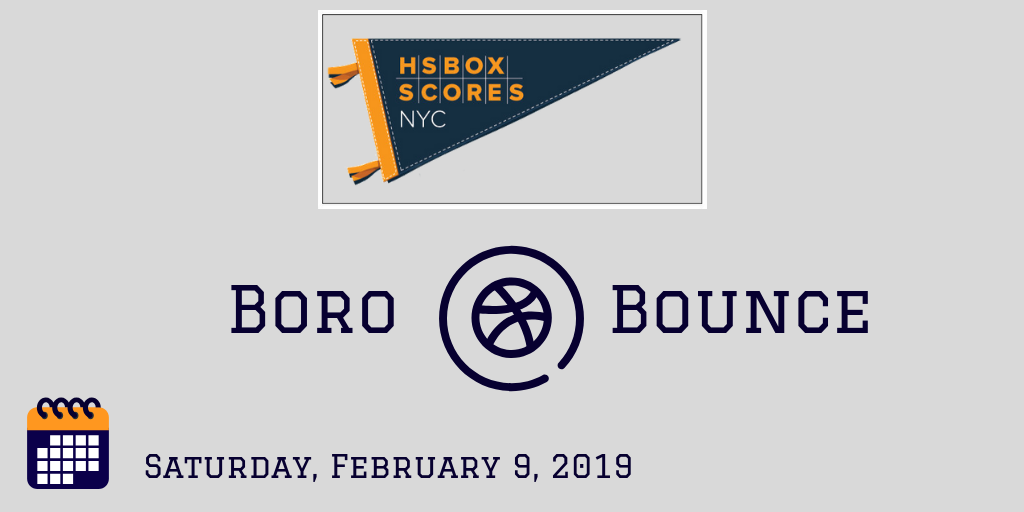 As the regular season comes to a close, here is an update on the action around the boroughs.

Friday is always a busy night for high school hoops, but last night marked the close of the PSAL's regular season schedule. Many teams in the CHSAA also wrapped up regular season play.

Congratulations to the Varsity Gaels as they defeated Cardinal Spellman and won the North A Division Championship @AHAthletics1909 @AllHallowsGAELS @gaelspride1909 pic.twitter.com/52RcVtZ2JN

All Hallows clinched the regular season crown in the CHSAA A North Division with a 69-41 win over Cardinal Spellman. The Gaels finished 11-2 in league play and 18-6 overall, taking the top spot in the newly minted subdivision that resulted from the CHSAA's bifurcation of the A ranks into North and South designations. Fordham Prep's lopsided 84-54 win over Kennedy Catholic earned them the second spot in the A North, finishing regular season play at 10-3 and 19-5. The Rams won 15 of their last 16 games, the only loss during that stint being the 54-52 nail-biter at All Hallows on January 11th.

Game tied at 52 in the closing seconds. Fordham Prep with a chance to hold for the last shot. Nick Johnson of All Hallows gets in the passing lane for the steal and lays it in with 3.7 ticks left. Gaels defend the last possession and win it 54-52 in a Bronx thriller @AHHoops1909 pic.twitter.com/kF1tGZQdCm

Thurgood Marshall Academy made it two wins in two days with a victory over Truman on Friday night. George Varmah and company clinched the PSAL Manhattan AA regular season title on Thursday night with a 74-70 home win over WHEELS, with Varmah reaching the 1,000 career point milestone in the game. The Panthers finished the regular season with a 19-4 record, but are still arguably underrated, barely ranked in NYS's top 25 at 22 by the New York State Sportswriters Association.

St. Raymond made it 14 straight wins and 19 of their last 20 with a 59-51 home win over Iona Prep. The Ravens, now 14-2, clinched at least a share of the CHSAA NY Archdiocese title and can take the crown outright with a win at Monsignor Scanlan on Sunday. Cardinal Hayes topped Scanlan 71-58 on Friday night, and the Cardinals are in the proverbial clubhouse having finished regular season play with a league record of 14-3. St. Raymond is one of the great stories of the season, stumbling out of the gate with three straight losses and then rattling off 19 wins over their next 20 games, the one loss coming to Long Island Lutheran, the number 1 team in New York State and currently nationally ranked. If the Ravens lose on Sunday, there would be a true deadlock atop the NY Archdiocese standings, setting the stage for another oddball tiebreaker. Last year a regular season tie between Iona Prep and Cardinal Hayes was decided by an odd-even point total in the St. John's DePaul game. Hayes took the top seed when Max Strus's 3-pointer made the total point output an odd number.

While the CHSAA B Division playoffs figure to be a two horse race, the CHSAA A Division tourney should be highly competitive, with Nazareth, All Hallows, Fordham Prep, Monsignor Farrell and Xavier all expected to be in the mix.

Archbishop Stepinac notched an impressive 83-63 win over Mount Saint Michael in White Plains on Friday night. After being riddled with injuries throughout the season, the now-healthy Crusaders loom as a postseason threat even though they are still the cellar dwellers in the New York Archdiocese standings with a league record of 6-10. Now that Adrian Griffin Jr. is back in the lineup to compliment fellow national prospect RJ Davis, Stepinac's peculiar position is likely to cause an anomalous scenario for a top seed in the early rounds of the New York Archdiocese tournament.

Margin of victory. Mount had won 8 of 9 and took St. Ray's to the wire in their only L during that stint. Believe it or not, this now-healthy Stepinac squad is still in the cellar of the NY Arch at 6-10 with one left. Feel for the unlucky top seed that draws the Crusaders. #HSBB https://t.co/AgBgX2a0yA

Deadlock in the PSAL's Top League

South Shore defeated Thomas Jefferson 68-51 in Canarsie on Thursday night, with Femi Odukale and Kadary Richmond scoring 20 and 19, respectively, and Jaquan Carlos putting up a game-high 33 for the Orange Wave. The win resulted in a season split between South Shore and Jefferson, culminating in a true deadlock atop the PSAL's most competitive league, the Brooklyn AA, with both teams finishing 12-2. Interestingly, the Orange Wave were still awarded the top seed in the upcoming borough tournament (see below for the complete seedings).

Big win by South Shore here. Vikings and Jefferson are now in a true deadlock atop the #PSAL Brooklyn AA standings at the end of regular season play, each 12-2 with a split of the season series. https://t.co/MyJYrJrmm2

Mike Libert of NYCHoops.net raised eyebrows from Canarsie on Thursday night, reporting that Marcus Burnett had transferred from Thomas Jefferson and was currently enrolled at South Shore. Burnett is still listed on Jefferson's inactive roster on the PSAL's website and, according to those records, played with the Orange Wave as recently as December 18, 2018, when he scored 2 points in Jefferson's 92-62 win over Boys & Girls. It is not clear when Burnett transferred, but PSAL eligibility rules provide that transfer students are not eligible at the new school for a period of one year from the transfer date, subject to certain exceptions.

Another note from today’s game is 6’4” Marcus Burnett has transferred out of Thomas Jefferson and is now enrolled at South Shore. While not eligible now the Class of 2020 guard could be a difference maker for the Vikings moving forward. @SSHSVikings @NYCHoops

Brooklyn Collegiate finished a game behind South Shore and Jefferson with a league record of 10-3. The Lions topped George Westinghouse 60-51 in their league finale on Wednesday night.

BRING ON THE PLAYOFFS 🦁 pic.twitter.com/Xatxcbmp9p

Todd Myles, the former Head Coach at PSAL Brooklyn AA constituent Paul Robeson, was arrested on February 1st and criminally charged with shooting Christopher Hooks, the father of a Robeson player, in an incident that occurred on December 22, 2018. Hooks went to the home of Myles, reportedly to complain about his son's lack of playing time, and was seriously injured in a shooting that also resulted in Myles suffering a gunshot wound. Initial reports indicated that the shooting suspect was a third party who fled the scene, but once Hooks was able to speak with police detectives he reportedly identified Myles as the shooter.

According to the New York Post's initial report, Hooks' mother was "visibly enraged" about her son's lack of playing time during Robeson's loss at George Westinghouse on Tuesday December 18th, with the Post citing an unnamed league source.

Robeson played another game at Westinghouse on Saturday December 22nd, the date on which the incident reportedly occurred, with the Eagles staging a comeback but falling just short against Xaverian in the Brooklyn Bridge Classic.

The Eagles overcame a 13 point fourth quarter deficit after Xaverian inserted their reserves, giving Robeson a chance to win the game on the last possession before Xaverian escaped with a 61-60 win.

On Saturday afternoon the PSAL announced the seedings and brackets for the upcoming Borough tournaments, with Thurgood Marshall Academy (Manhattan), Thomas Jefferson (Brooklyn), Cardozo (Queens) and Eagle Academy (the Bronx) taking the top seeds. The action starts on Monday night, all games with a 5:00 pm tip except for the championship games. According to the PSAL's website, the Queens and Bronx Borough championship games will be played at Queens College on Friday at 4:45 pm and 6:30 pm, respectively, while the Brooklyn and Manhattan Borough title games will be played at York College on Saturday at 2:00 pm and 3:45 pm, respectively. In past years the championship games have typically been played on a Saturday at a single site.

In Queens on Monday, Far Rockaway (8) will host Flushing (9) and John Adams (7) will host August Martin (10). The second round games include Construction (4) at home against Springfield Gardens (5) and John Bowne (3) at home against Hillcrest (6), with Cardozo (1) hosting the winner of Far Rockaway/Flushing and Francis Lewis (2) hosting the winner of John Bowne/Hillcrest.