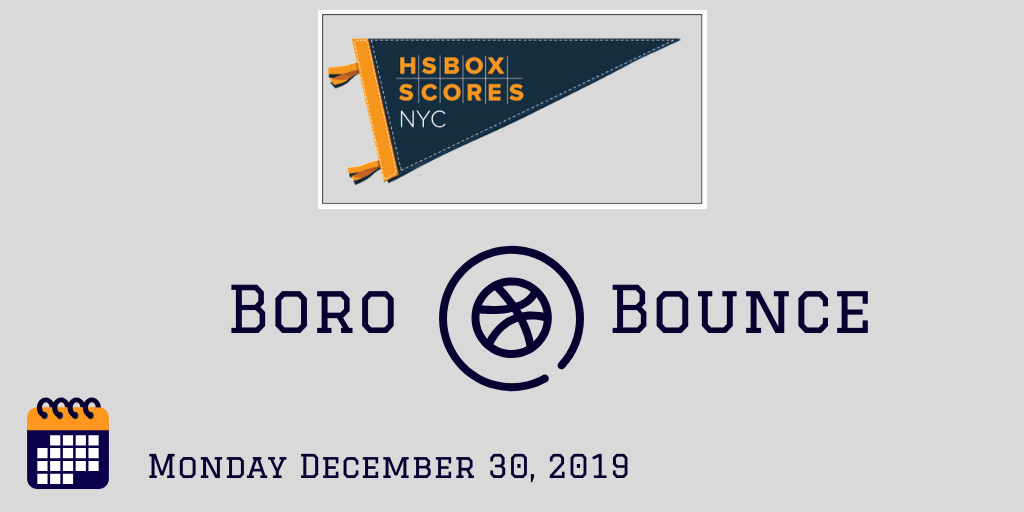 A weekly update of the action on the high school hardwood around the boroughs and beyond.

This week, its way beyond. Archbishop Stepinac and St. Raymond made national headlines for their performances at the Slam Dunk to the Beach Tournament in Lewes, Delaware over the weekend.

Stepinac took down Paul VI (VA), ranked number 2 nationally in the Ballislife Fab 50, 70-64 on Sunday. With North Carolina head coach Roy Williams and Georgetown head coach Patrick Ewing in attendance, the tournament billed the game as its "biggest matchup ever."

Our biggest matchup EVER. https://t.co/9VUeCgAxG0

RJ Davis scored 21 points and had 9 rebounds while Adrian Griffin Jr. had 18 and 12 for Stepinac. The win is expected to give the Crusaders, currently number 20 in the Fab 50, a boost in the national rankings.

Also improving its standing on the national scene was St. Raymond, which flexed its muscles down at the beach with two lopsided victories, a 93-36 win over host Cape Henlopen (DE), and a 75-45 win over New Jersey power Gill St. Bernard's. Luis Kortright led the Ravens with 22 points and 24 points, respectively, with Reggie Hudson scoring 15 and 15 and Malachi Smith 17 and 11.

Looks like St. Raymond's really flexed its muscles at the @slamdunktobeach in Delaware. At 7-1, only loss for the Ravens so far is the OT thriller against Stepinac. @CHSAA_NYC #HSBB https://t.co/uf3HKYANb8

Stepinac has a rivalry game against Iona Prep in the Crusader Basketball Classic at the Westchester County Center on Friday. The Gaels, who are unbeaten in league play in three tries (including a road win at Xaverian) will have almost two weeks' rest by the time that game tips. Cardinal Hayes and South Shore will play the opener. Hayes enters that game on the heels of back-to-back league wins over Christ the King and St. Peter's, while the Vikings suffered a 71-63 loss to Rock Creek Christian (MD) at the Governor's Challenge in Salisbury, MD on Monday.

One week from tonight: The Game of the Year in the Hudson Valley.

Iona Prep vs Stepinac in the Crusader Classic at the Westchester County Center.

Tickets are still available but going fast. Only 526 left. Odds are it will be sold by Friday morning. pic.twitter.com/IXWL346CpI

St. Raymond's next league game will be against none other than Stepinac, in White Plains no less, next Friday. The Ravens have two tough ones on the road before that, taking on Bergen Catholic on Wednesday and nationally-ranked Long Island Lutheran on Saturday.

Ideally the next Stepinac vs. St. Raymond battle would be in a larger venue, but the game in White Plains on Friday, January 10th will undoubtedly be a very hot ticket.

Xaverian improved its overall record to 9-1 with a 45-37 win at Christ the King on Sunday. In a season-low point total for both teams, Elijah Hardison scored a game-high 17 points for Xaverian, controlling the paint and the offensive glass. The Clippers will host St. Francis Prep in Bay Ridge on Friday.

The Terriers have won 5 of their last 6, starting with the five overtime thriller at Christ the King and ending with a 55-39 win over Bishop McDevitt (PA) in Elmira on Monday.

St. Francis Prep has now won 5 of their last 6, starting with the 5 OT thriller against Christ the King. Terriers improve to 6-3 overall. #HSBB https://t.co/bQ5DSneUkP

The Lady Terriers suffered their first loss of the season to Montverde Academy on a buzzer-beater in Orlando, Florida last Thursday. St. Francis Prep had rallied to tie the game after trailing by 8 with 2:00 left.

A buzzer beater by a tough Montverde team gives SFP it’s first loss of the season at the Florida Prospects tournament in Orlando. Great game and we fought down to the wire!

Monsignor Scanlan has also won 5 of its last 6, splitting a pair at the Governor's Challenge. The Crusaders were edged by Piedmont Classical (NC) 79-77 on Saturday, but bounced back with a 63-50 win over Glenelg County on Sunday. Koby Brea had 28 points and Joe Munden had 22 for Scanlan in the win.

Monsignor Scanlan has now won 5 out of its last 6 and the only setback during that stint was the 2 point loss to Piedmont Classical (NC) last night. #HSBB #nycbasketball https://t.co/SnLFHr4DBS

Eagle Academy, 7-1 in the PSAL Bronx AA standings, went 0-2 at the Governor's Challenge, falling to Lake Nona (FL) 75-64 on Saturday and 58-55 to Gilman (MD) on Monday. DaMarco Watson scored 27 points in the loss to Lake Nona and 18 in the setback to Gilman. St. Peter's also dropped two at the Governor's Challenge, a 51-48 loss to Sidwell Friends and a 58-50 setback to Highland School (VA).

Medgar Evers College Prep advanced to the championship of the Governor's Challenge with a 49-29 win over Walt Whitman (MD). The Lady Cougars (6-0 in the PSAL Brooklyn A East I) will face South Lakes (VA) in the championship game on Tuesday.

Holy Cross gave Benjamin Banneker its first loss of the season, topping the Warriors 64-54 in the championship game of the Monsignor King Tournament at St. Thomas Aquinas in Brooklyn on Monday night. Banneker, now 12-1 overall, had an impressive 65-48 win over St. Edmund to reach the final. Holy Cross improved its overall record to 5-4.

Eagle Academy III is 6-0 atop the PSAL Queens A East II Division, all routs except for a 51-48 triumph over Hillcrest.

Cardozo improved to 11-0 after non-league wins over PSAL Bronx AA contender James Monroe (55-44) and Montclair (NJ) (69-53). Errol White has recorded a double-double in 6 of the Judges' last 7 games. The exception during that stint was a 10 point 9 rebound performance against Francis Lewis.

Monsignor Farrell won the KSA Events Holiday Tournament in Orlando with an 82-52 win over New Rochelle on Monday. The Lions won three games on the Florida trip and improved their overall record to 9-1.

Xavier topped CB East (PA) 51-47 on Monday to win the Cactus Jam in Arizona, improving their overall record to 7-2.

Maspeth had an eyebrow-raising 53-30 win over Fannie Lou Hamer in a PSAL B heavyweight matchup in Queens on Monday. The Argonauts' defense held the Panthers to a season-low point total.

Maspeth with a big win and an exceptional defensive performance in a match up of #PSAL B heavyweights in Queens today. #PSAL #HSBB https://t.co/epkkc14435

* This post was updated to add the win by MECP over Walt Whitman (MD) and the points scored by DeMarco Watson of Eagle Academy against Gilman.