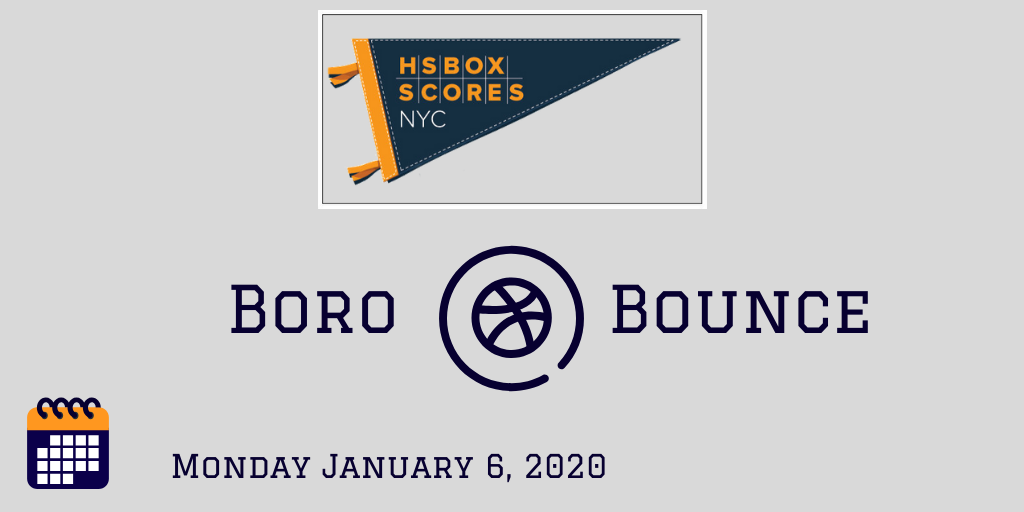 Here's your weekly update on the high school hardwood action around the boroughs and beyond.

Archbishop Stepinac stays at the top of the list, defeating CHSAA AA Archdiocese rival Iona Prep 62-54 at the Westchester County Center on Friday night to improve their league record to 4-0. An estimated 3,500 spectators were on hand to take in what resembled a Westchester version of Hoosiers. RJ Davis led the way for the Crusaders with 22 points and Luke Fizulich added 13, but Adrian Griffin Jr left the game with an injury and is reportedly day-to-day pending an evaluation. Aidan Hilderbrand and Keeshawn Jones had 13 points each for Iona Prep. The Gaels, now 3-1 in league play, dropped a non-league contest to Holy Trinity (LI) on Saturday. After trailing by as many as 17, Iona Prep pulled within 2 before falling 73-70. The Gaels will host Holy Cross on Tuesday.

Stepinac will host St. Raymond in White Plains on Friday. The Ravens lost consecutive games for the first time this season, a 69-67 loss to New Jersey powerhouse Bergen Catholic on New Years Day and a eyebrow-raising 91-64 setback to nationally-ranked Long Island Lutheran in Brookville on Saturday. Malachi Smith scored 29 points for St. Raymond's in the loss to Bergen Catholic and Luis Kortright had 19 for the Ravens against LuHi.

St. Raymond bounced back on Sunday with a 79-71 win over Dwight Englewood (MJ) despite Malachi Smith being out of the lineup (flu) and Gary Grant still sidelined with an injury. Reggie Hudson put up an eye-popping 40 points for St. Raymond in the win.

Less than 24 hours after its loss to LuHi, St. Raymond bounces back with a 79-71 win over Dwight Englewood. With Malachi Smith out of the lineup, Reggie Hudson stepped up and scored 40 points for the Ravens. #HSBB
Link to the box score⬇️https://t.co/YWGTEYK1wn pic.twitter.com/dUoTRYULy7

South Shore topped Cardinal Hayes 73-68 in the opener of the Crusader Classic at the Westchester County Center on Friday. Ziare Wells scored 23 points and Marcus Burnett had 20 for the Vikings. South Shore picks up with the PSAL Brooklyn AA grind on Tuesday, when the Vikings will visit George Westinghouse. Shemani Fuller scored a game-high 35 points and Julien Soumaoro had 22 for Hayes in the loss to South Shore. The Cardinals bounced back with a 71-41 win over Knox School at LuHi's Shooting Stars showcase event on Saturday. Fuller led Hayes again, this time with 21 points. Hayes will host Mount Saint Michael on Tuesday.

The Mountaineers edged St. Anthony's (LI) 44-41 at the Shooting Stars showcase on Saturday, with Tyler Hawkins leading the way for the Mount with 16 points.

Xaverian improved its overall record to 11-1 with an impressive 64-52 win over Monsignor Scanlan on Sunday. Nick Folk led the Clippers with 25 points, as Xaverian is emerging as one of the teams to beat in the boroughs. The Clippers will host Archbishop Molloy on Tuesday. The Stanners are 8-2 after a convincing 76-50 road win at Holy Cross in Flushing on Friday night and a 69-67 squeaker over Chaminade on a last-second runner by Speedy Carcamo at the Shooting Stars showcase on Saturday.

Speaking of last-second shots, Khalil Brantley continued his storied season for Boys & Girls when his 3-point buzzer-beater lifted the Kangaroos to a 65-64 stunner over previously unbeaten Brentwood (LI) at the Shooting Stars showcase on Saturday.

Boys & Girls trailed 61-52 with 2:30 left, but closed the game on a 13-3 run to win it on Brantley's gem, likely the shot of the season in NYC high school hoops thus far. Brantley scored 26 of his game-high 34 points in the second half, 13 in the fourth quarter.

Brantley was on the other side of an eerily similar buzzer-beater last season, when Avni Mustafaj banked in a 3-point game-winner to lift Fordham Prep over Nazareth in the CHSAA A Division Semifinals.

The Orange Wave were edged by Canarsie 88-85 on Friday, with Kevin Tabb scoring 37 points and Jaquan Carlos 35 for Jefferson in the loss. Amag Tate led the Chiefs with 26 points, while Alpha Bah had 20. Canarsie was edged by WHEELS 75-74 on Saturday, with Tate putting up 36 points for the Chiefs.

With their wins over Canarsie and Brooklyn Collegiate on consecutive days, WHEELS looks to be one of the hotter teams in the boroughs. The Wolves are 5-2 in the PSAL Manhattan AA standings, two games behind Thurgood Marshall Academy, who leads the way at 6-0. The Panthers suffered back-to-back setbacks on Long Island last week, falling to St. Anthony's 78-60 and Chaminade 80-63, but those losses don't look so bad after the Shooting Stars showcase, where St. Anthony's and Chaminade took CHSAA contenders Mount and Molloy to the wire.

WHEELS will visit Manhattan Center on Tuesday, host Samuel Gompers on Thursday and then face a tough test on Saturday, when they will play John Bowne in Queens. The Wildcats improved to 12-1 overall with a 70-51 win over Poly Prep on Sunday, with Amadou Diallo registering 24 points.

Cardozo improved to 13-0 overall with two consecutive wins aganst QHST, 81-48 win on Friday and 91-61 on Monday. Romello Faison scored 15 points and Aaron Miller had 14 for the Judges in Friday's win and Chamarri Baskerville scored 14 points and Miller had 13 points and and 14 rebounds on Monday. Cardozo is the only unbeaten AA team left in the boroughs. Mark your calendar for January 28th, for that is the date of Round 2 between Cardozo and Bowne, to take place in Bayside.

Cardozo head coach Ron Naclerio reminded the twitterverse that he has been coaching the Judges for 5 decades, 6 if you include his tenure as an assistant. Amazing in and of itself, but even more so considering Coach Naclerio still has the energy and intensity of a first year coach on the sidelines.

DeWitt Clinton announced the completion of its new court, commemorating alumni Nate Tiny Archibold and Dolph Schayes, and the Governors welcomed it with a 66-51 win over Roosevelt on Friday night. Daryl Cleckley led DeWitt Clinton with 18 points.

Home Sweet Home! Clinton playing their first home game of the season pulled away from Roosevelt for a 66-51 victory. Sr. Daryl Cleckley led the way with 18 points and Sr. Davion Bonar has 11 points, 11 rebounds and 8 assists. Next up Longwood at home Monday. Clinton now 5-5.

KIPP Prep survived a late surge by Van Arsdale to edge the Cardinals 58-57 in a PSAL Class A non-league clash at the Barclays Center on Friday night. Damir Brooks scored 21 points and Herbet Hawkins had 20 to lead KIPP, which is 9-0 atop the PSAL Bronx A Central Division. Jaheem Tyson led Van Arsdale with 19 points, including a deep 3-pointer that brought the Cardinals within a bucket in the closing seconds.

Damir Brooks scored 21 points and Herbert Hawkins had 20 for KIPP. Jaheem Tyson had 19 points and Naje Flowers had 16 for Van Arsdale.#PSAL #HSBB
Link to the box score⬇️https://t.co/LT7hkFd3Bs pic.twitter.com/ckVfd51jZ1

St. Edmund Prep earned a noteworthy 67-66 overtime win over Monsignor Farrell on Friday night to take sole possession of first place in the CHSAA A Division with a league record of 5-1. The Eagles and the Lions played an overtime thriller in last year's CHSAA A Division Quarterfinals at Mount, a game that Farrell won before taking Fordham Prep in overtime to win the title. St. Edmund Prep will host Xavier on Tuesday.

In girls hoops, St. Francis Prep defeated The Mary Louis Academy 47-25 in Queens on Saturday. The Lady Terriers are currently ranked 5th in New York State among Class AA schools by the NYSSWA and will host Monsignor Scanlan on Wednesday. South Shore, ranked 2nd, had a lopsided win against Manhattan Center on Friday will host Midwood on Monday. Xaverian, ranked 6th, is 7-1 after a 90-71 win over St. John's Prep on Saturday, with Julia Fabozzi scoring 26 for the Lady Clippers. Xaverian visits Bishop Loughlin on Monday with their next two at Christ the King and at St. Francis Prep.

Medgar Evers College Prep, ranked 10th in New York State among Class A schools, lost in the championship game of the Governors Challenge, falling to South Lakes (VA) 68-54 on New Years' Eve. The Lady Cougars dropped a 61-44 contest to Baldwin on Sunday.

After advancing to the championship game at the @GovChallenge, Medgar Evers College Prep falls to South Lakes (VA) 68-54 in the final. @MECPS_WBB #PSAL #HSBB #nycbasketball https://t.co/yGkw7WZGwX