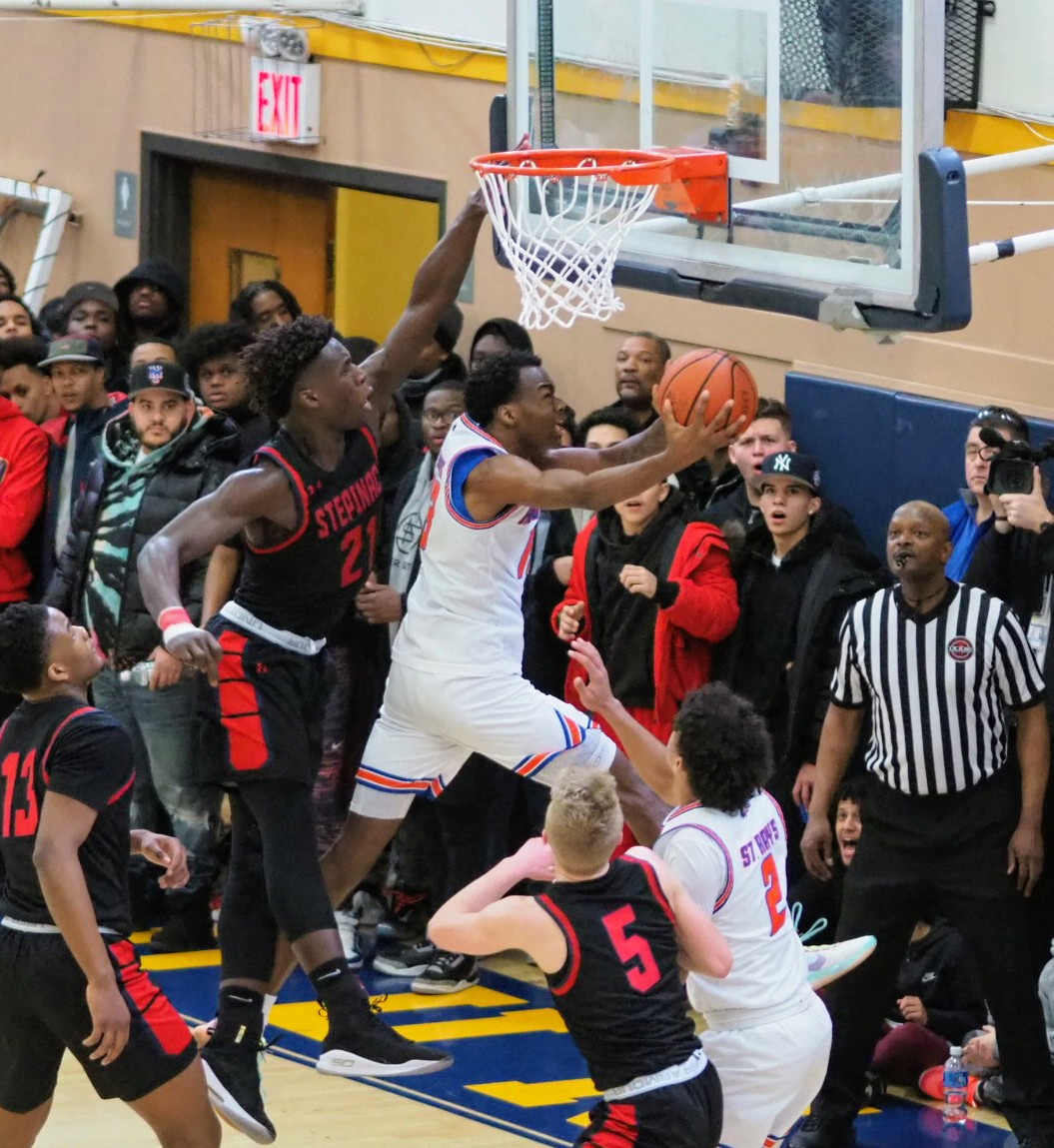 While it was the third meeting of the season between the two CHSAA heavyweights, it was the first with both teams playing at full-strength. Stepinac outlasted St. Raymond 100-93 in an early-season overtime thriller on December 15th, a game also played at Mount, but the Ravens were missing frontcourt standout Gary Grant. St. Raymond returned the favor on January 10th, as the Ravens went to White Plains and defeated Stepinac 93-68 while Duke commit Adrian Griffin Jr was sidelined.

With both teams healthy and the stakes much higher, the result was 32 minutes of basketball played at a sky high level, captivating a capacity crowd huddled around the court atop the Mount.

Griffin Jr scored 10 of his 17 points in the fourth quarter, ending the game with an emphatic exclamation point dunk, while Grant scored a game-high 27 points, 16 in the second half, with both players keeping the flood of video cameras along the baselines busy throughout.

For St. Raymond, Grant's performance was complimented with an 18-point effort by forward Kedar Davis and 14 points from Luis Kortright, who had his own share of highlight reel content.

The Ravens held a 16-11 lead after the opening eight, with Grant and Davis combining for 11 of St. Ray's 16, but RJ Davis and Griffin Jr started to heat up for Stepinac in the second, scoring 12 of the Crusaders' 20 points in the quarter. The rally hit a speed bump when Stepinac's bench was assessed a technical foul after Griffin Jr slammed in an RJ Davis miss, but the Crusaders still closed the half on a 12-2 run, holding a 31-24 lead at the break.

St. Ray's made key defensive adjustments at the half, switching from man-to-man to a full-court press with sideline traps, taking away Stepinac's offensive rhythm, causing turnovers and creating points in transition. Malachi Smith's steal and layup put St. Raymond ahead 40-38, and the Ravens took their largest lead of the game at 47-40 after a 3-point play by Kedar Davis, a Kortright putback and two Kortright free throws awarded after RJ Davis was whistled for a technical during a scuffle for a loose ball with 1:35 to play in the third quarter.

St. Raymond held a 51-46 lead after three, but Stepinac came out prepared for the full-court pressure in the fourth, opening the quarter on a 5-0 run and knotting the game at 51 on a triple by Fizulich at the 7:00 mark. Two free throws by RJ Davis put Stepinac ahead 53-51, with an already fast-paced contest moving at a frenetic clip over the next few minutes.

After Grant and Chimezie traded dunks, Grant scored 6 straight for the Ravens, including a pretty spin in the lane and a eurostep that put St. Ray's ahead 59-55. Griffin Jr somehow managed to follow his own missed 3-point attempt to make it 59-57, but Kortright extended the Ravens' lead to 62-57 with a fade away triple.

Adrian Griffin Jr follows his own 3-point miss during Archbishop Stepinac's 73-68 win over St. Raymond in the @CHSAA_NYC NY Arch final on Saturday. Griffin Jr scored 10 of his 17 points in the 4th quarter. @step_basketball #HSBB pic.twitter.com/psIHNOjTJJ

Morety answered with a 3-pointer for Stepinac to make it 62-60, but St. Raymond pulled ahead by five again, taking a 66-61 lead after Malachi Smith's driving score and Kedar Davis' bucket off a shovel pass from Grant in the paint. Morety came up with another clutch bucket to make it a one possession game at 66-63, and Griffin Jr scored the next 4 points for Stepinac on a pair of free throws and a runner on the left side of the lane, giving the Crusaders the lead at 67-66 with just 1:06 left.

St. Raymond emerged from a timeout with a brilliant play call that resulted in a two-handed Kortright dunk off a back-door cut to give them the lead at 68-67, but Griffin Jr's pullup on the ensuing possession gave Stepinac the lead right back at 69-68, and the Crusaders called for time with just 44.4 ticks left.

The Ravens came up empty on their next possession, and Fizulich put Stepinac in front 71-68 with two free throws after he was fouled rebounding a miss by Malachi Smith. Trailing by 3, the Ravens went for 2 on their next trip, with Stepinac defending a drive by Smith and regaining possession. The Crusaders managed to avoid being fouled in the closing seconds, and Griffin Jr slammed one home as time expired to make it a 73-68 final.

Stepinac and St. Raymond will each receive a bye in the opening round of the CHSAA intersectional city playoffs during the upcoming week. As a result, the next game for both teams will be in the quarterfinals at Fordham University next Sunday, with Stepinac facing the winner of Bishop Loughlin and Iona Prep and St. Raymond getting Archbishop Molloy or St. Peter's. The aforementioned opening round games will take place at St. Francis Prep on Thursday night. The other two opening round games in the CHSAA intersectional playoffs (Cardinal Hayes vs. Mount and Monsignor Scanlan vs. Christ the King), will be played at St. Raymond on Wednesday night.

This is the @CHSAA_NYC “AA” intersectional tournament bracket: