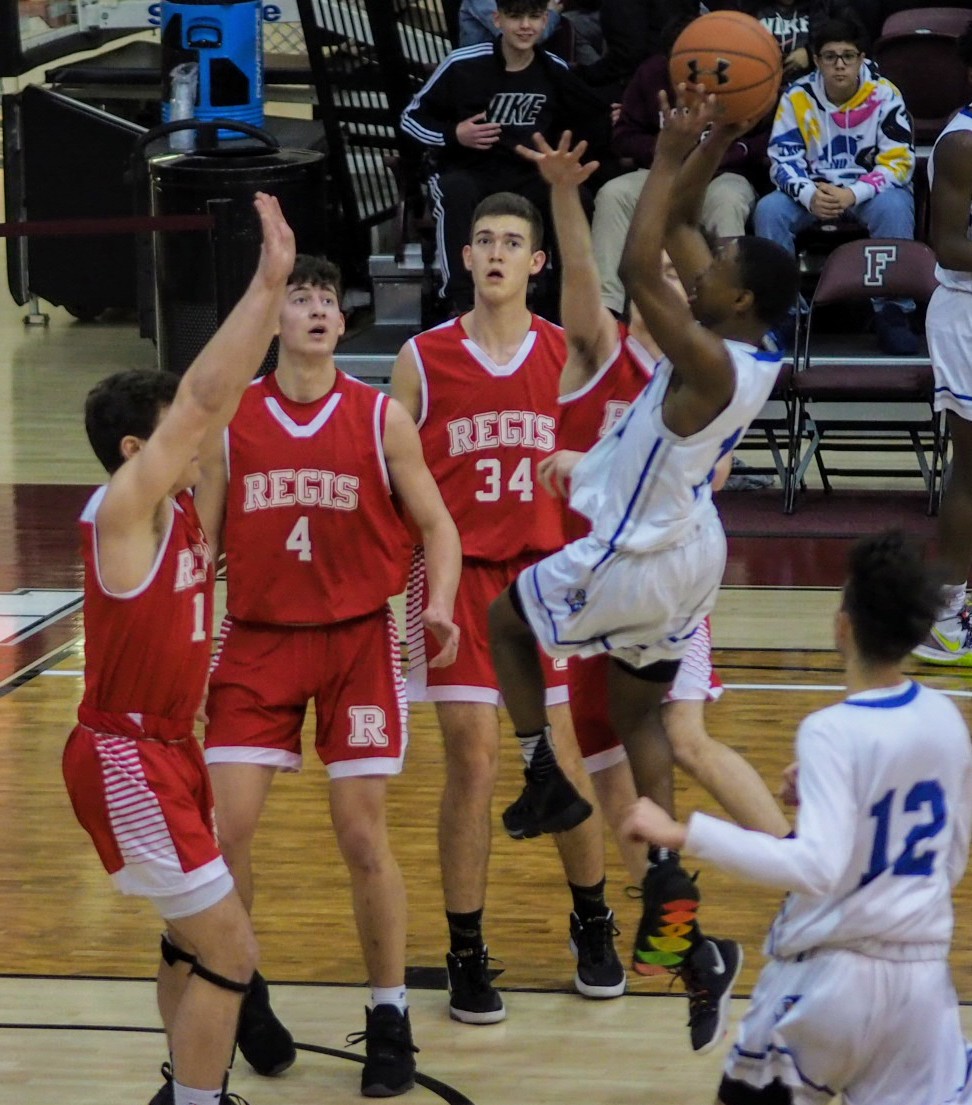 TJ Chisolm fueled an 8-0 rally to open the third quarter, as Salesian used a big second half to take down rival Regis 57-51 and win the CHSAA B Division title at Rose Hill Gym on the campus of Fordham University in the Bronx on Friday night.

After scoring just 19 points in the first half, the Eagles put up 19 in each of the third and fourth quarter to pull away from the Raiders down the stretch.

CHSAA B Division MVP Joe Manfredi had Regis ahead 20-19 at the half, but Chisolm connected on a pair of triples in the opening minute of the third quarter, part of an 8-0 run that put Salesian ahead 27-20 and prompted a Raider timeout.

Salesian opened the 3rd Q on a 8-0 run to take a 27-20 lead, including 2 quick triples from TJ Chisolm. Regis calls a TO with 6:54 left in the 3rd. @CHSAA_NYC @salesianhoops @RegisRaiders #HSBB

Regis pulled within four at 35-31 when Spencer Eastep put back a Manfredi miss with 35 seconds left in the third, but Salesian closed the quarter with a triple by Camar Neil and a steal by Steven Rice, giving the Eagles a 38-31 lead going into the fourth.

It looked like Salesian might put the game away after another 3-pointer by Chisolm and a tip-in by Rice put the Eagles ahead 43-34 with 6:01 left, but Julian Castaybert connected on a triple on the next possession, giving Regis a much-needed basket to keep Raiders in it. Still, Salesian continued to swarm Manfredi on defense, and the Eagles took their largest lead of the game at 48-37 when Neil muscled a power move in the paint with 3:04 left.

A 3-pointer by Peter Murray made it a two possession game at 51-45 with 1:25 left, but Regis got no closer than six, despite Salesian leaving the door ajar with missed free throws in the final minute.

Chisolm finished with 14 points to lead Salesian, while Manfredi scored a game-high 26 points for Regis.

Either Salesian or Regis has won the CHSAA B Division title in six of the last seven years. The only other school to win a B title during that stint was LaSalle Academy in 2017, a team led by UConn standout James Bouknight.

#TBT Dunk by James Bouknight for LaSalle Academy against Sacred Heart in January 2017. Bouknight led LaSalle to the 2017 @CHSAA_NYC B and NYS Federation B titles. Cardinals finished the 2016-17 season with a record of 27-2. #NYCBasketball pic.twitter.com/cgedv8CtiB