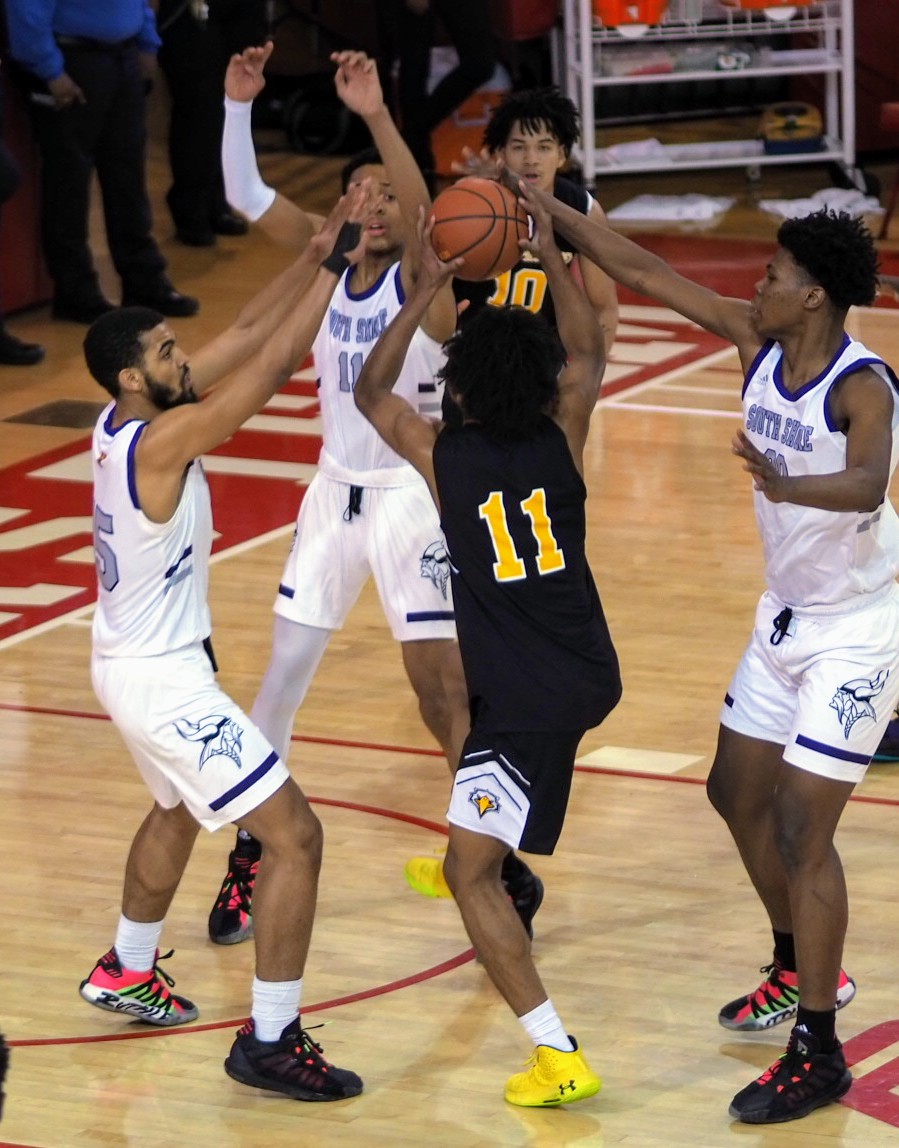 Ziare Wells scored 10 of his 16 points in the first quarter, as top-seeded South Shore advanced to the PSAL AA Semifinals with a 54-47 win over 8th-seeded Eagle Academy at Carnesecca Arena in Queens on Sunday.

Behind DaMarco Watson, Eagle Academy jumped out to a 6-0 lead, but Wells scored the next 8 points of the game, including two 3-pointers, and the Eagles called for time when the Vikings rattled off 10 straight to take a 10-6 lead.

The Eagles played even with the Vikings for the rest of the half, facing a manageable 24-20 deficit at the break, with Watson accounting for 11 of Eagle Academy's 20 points.

Eagle Academy tied the game at 29 on a 3-pointer by Kevin Wilson with 2:48 to play in the third quarter, but South Shore cashed in at the free throw line for the remainder of the frame, taking a 37-33 lead going into the fourth.

End of 3rd Q: South Shore 37 Eagle Academy 33. Eagles tied the game at 29, but Vikings cashed in at the FT line at the end of the frame. #PSAL #HSBB pic.twitter.com/DZ42suI91X

The whistle-fest continued over the final 8:00, with the Vikings getting to the line 14 times. Although South Shore made just 7 of these chances, their 17 points in the final frame were enough to hold off the Eagles, who went 5-9 on FTs during this stint. Dontae Prescott, who finished with 14 points for South Shore, scored 8 from the stripe.

South Shore will face Brooklyn AA rival Thomas Jefferson in the Semifinals, a rematch of last year's PSAL championship game won by the Vikings. The Orange Wave squeaked by John Bowne 78-76 in the penultimate PSAL AA Quarterfinal match on Sunday.

* This post has been updated. An earlier version of this post indicated that Vernon Simmons of Eagle Academy was held scoreless.