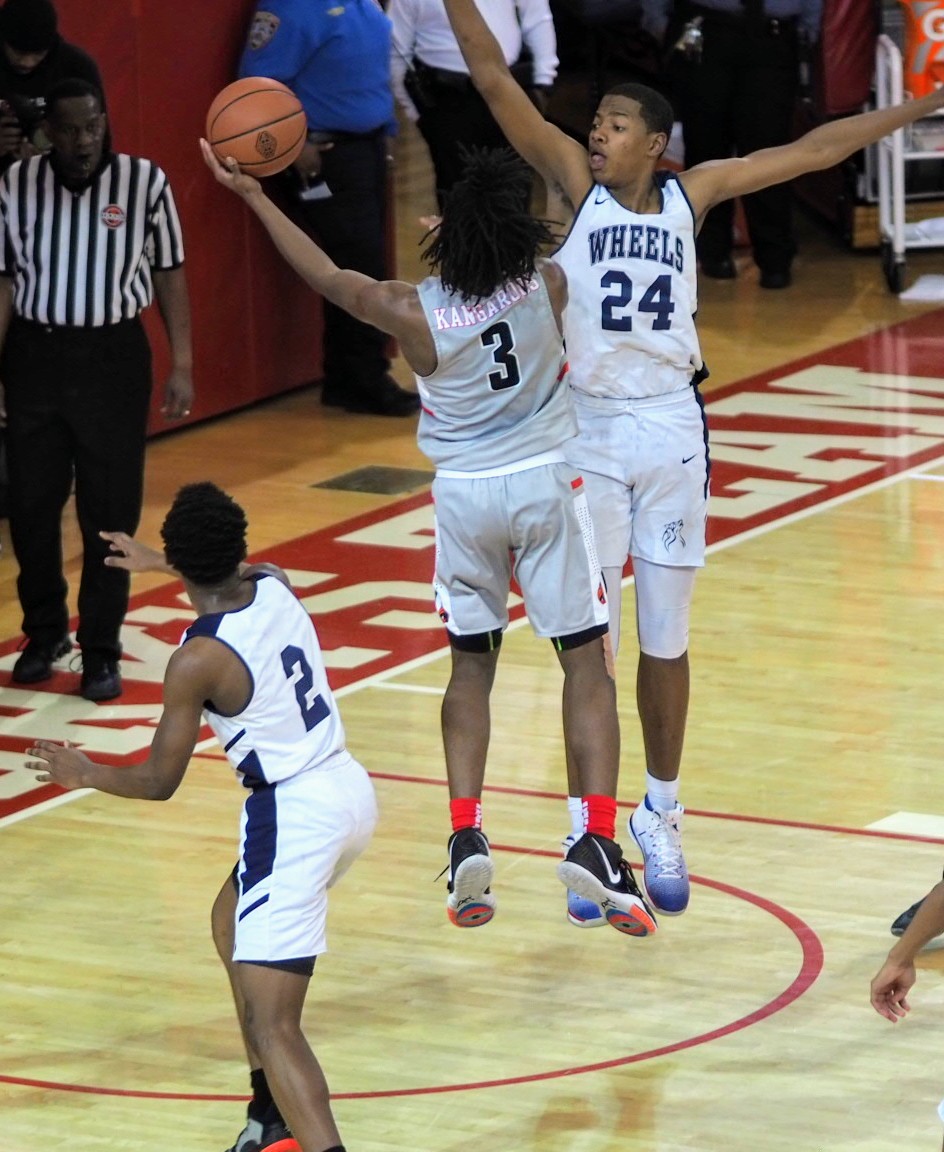 Jeremiah Davis of WHEELS came up with the play of the game, intercepting a pass and converting a clutch step back 3-pointer with 27.3 seconds left, as the Wolves used a stifling full-court press to edge Boys & Girls 63-59 in the PSAL Quarterfinals at Carnesecca Arena on Sunday.

Boys & Girls held a 51-46 advantage heading into the fourth quarter, but WHEELS tied the game at 58 on Justin Soto's free throw with just 49.8 seconds left. Boys & Girls took possession with a chance to regain the lead, but Davis stole a cross court pass and raced downcourt, pulling up near the 3-point line, stepping back and draining the triple to put the Wolves ahead 61-58.

Here's the play of the game. After Justin Soto of WHEELS ties the game at 58 on a FT with 49.8 seconds left, Jeremiah Davis intercepts a pass and drains a step back triple to put the Wolves ahead 61-58 with 27.3 ticks on the clock. WHEELS goes on to win it 63-59. #PSAL #HSBB pic.twitter.com/hL4fyayuG5

With WHEELS deep in the double bonus, Boys & Girls had chances at the line in the closing seconds, but the Kangaroos misfired on 3 of 4 free throw attempts over the last 27.3 ticks. Randy Crosby sealed the win for WHEELS on a free throw when he put the Wolves ahead 63-59 with 9.7 seconds left.

Despite being swarmed by the WHEELS defense throughout the game, standout point guard Khalil Brantley still scored a game-high 30 points for Boys & Girls, although he made just one field goal in the fourth. That basket, a floater in the lane, gave the Kangaroos a 58-57 lead with 1:00 left. Soto was fouled in the act on the next possession, and he made the second of two FTs to tie the game at 58.

Crosby had to tiptoe around foul trouble over the last three quarters, but he still put up 20 points for WHEELS, while Soto finished with 14 for the Wolves.

WHEELS will face Brooklyn Collegiate in the semifinals. The Lions opened the season with ten straight wins before the Wolves handed them their first loss back on January 6th.

The PSAL AA Semifinals were initially scheduled to be played at Carnesecca Arena, but St. John's announced on Monday that it had canceled all campus activities through March 27th out of an abundance of caution in light of the coronavirus situation. According to the PSAL website, the semifinal games remain scheduled for Saturday, reportedly to be played at Francis Lewis High School in Queens.

Per source: Saturday’s #PSAL semifinals will be played at Francis Lewis HS. Fans are allowed.

The gym will be cleared in between, the PSAL will do tickets for separate sessions