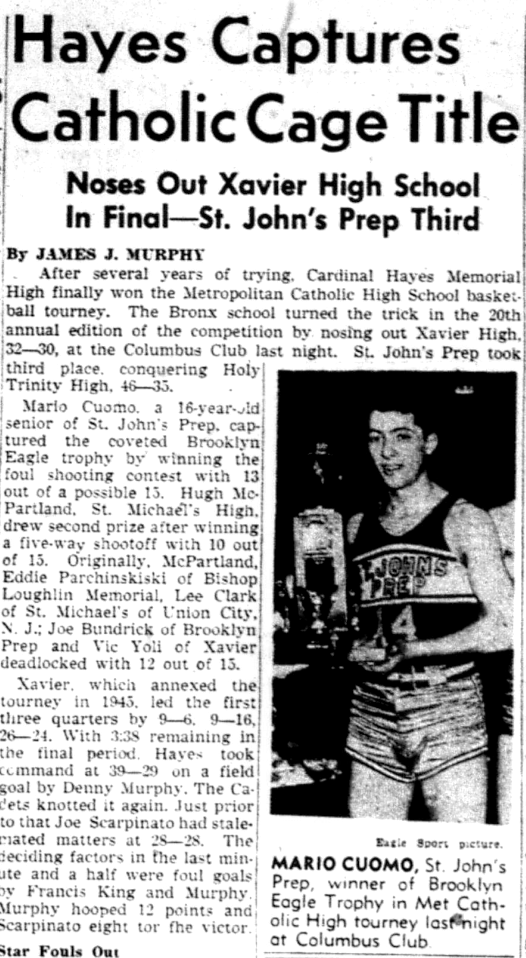 The late, great Mario Cuomo, former Governor of New York, was a two-sport CHSAA athlete at St. John's Prep in Brooklyn. In addition to being the centerfielder for the 1949 CHSAA City Championship baseball team, Cuomo also lettered in basketball.

Mario Cuomo was named to the Brooklyn Daily Eagle's All-Brooklyn CHSAA Second Team and went on to play baseball at St. John's University. He signed a pro contract in 1952 and played one season for the Brunswick Pirates in the Georgia-Florida League, batting .244 over 81 games with 1 HR. 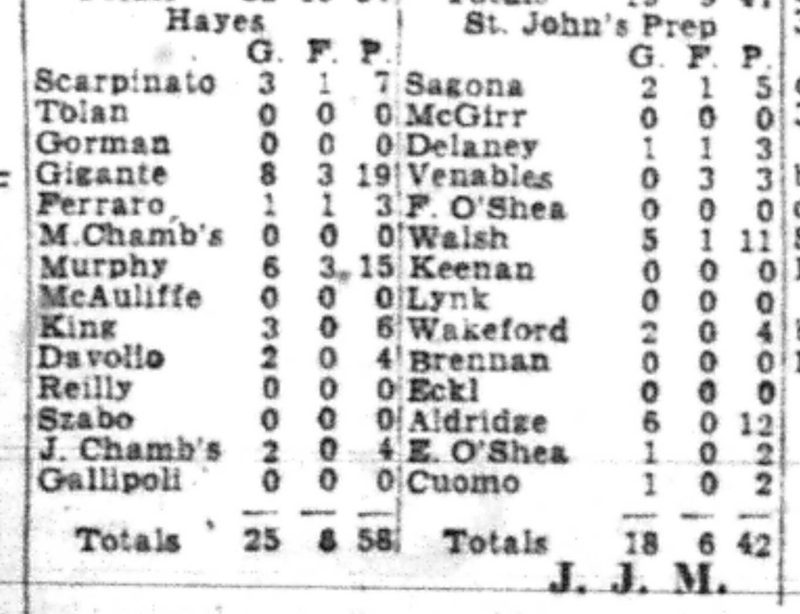 Although Mario Cuomo reached the professional ranks in baseball, there is evidence to suggest the namesake of the Hudson River-spanning bridge formerly known as the Tappan Zee may have preferred basketball.

William O'Shaughnessy's tribute, Mario Cuomo, Remembrances of a Remarkable Man, is loaded with hoop references, with a particular emphasis on the former Governor's aggressive style of play.

O'Shaughnessy transcribes the eulogy that was delivered by current Governor Andrew Cuomo for his father, which the author describes as "absolutely spectacular." That eulogy included descriptions, in stark detail, of bruising one-on-one father-son games, such as– "He would hit you in places the human body did not have anatomical defenses" and "[t]he issue of calling fouls plagued us." Even enlisting state troopers as referees apparently didn't help, for fear of winding up "on a weigh station somewhere up the Northway" after a bad call.

The 2020 CHSAA city intersectional playoffs were cut short as a result of the COVID-19 outbreak. The quarterfinals, scheduled to be played at Fordham, just as the CHSAA city championship was in 1949, were initially postponed and eventually cancelled. The New York State Federation Tournament, scheduled to take place at Fordham for the first time since the tournament's inception in 1979, was also cancelled.

Governor Andrew Cuomo declared a state of emergency on March 7th. When New York Magazine recently inquired about his energy in responding to the COVID-19 situation, he replied "[w]hen a bear is charging at you, if you are not energized, you are dead."

The Governor continues to guide the Empire State through a daunting public health crisis.

After consistently expressing concern over his mother, Matilda Cuomo, at press briefings during the COVID-19 outbreak, on Friday March 20, 2020, Governor Andrew Cuomo announced Matilda's Law, designed to protect seniors and those with compromised immune systems.

NEW: I am announcing Matilda's Law to protect NYers age 70+ and those with compromised immune systems:

We are laser focused on protecting those most at risk.

We would be remiss if we did not mention another basketball anecdote from O'Shaughnessy's homage to Mario Cuomo, this one concerning Matilda and a visit to Italy.

The former Governor called a friend, "I understand some guy she met in Lake Como is greatly taken with Matilda. He's a singer . . . named Luciano Pavarotti . . . a very good one, I'm told . . . I don't know if I have to worry. "

The former Governor, "[n]o, but I can take him out on the basketball court."