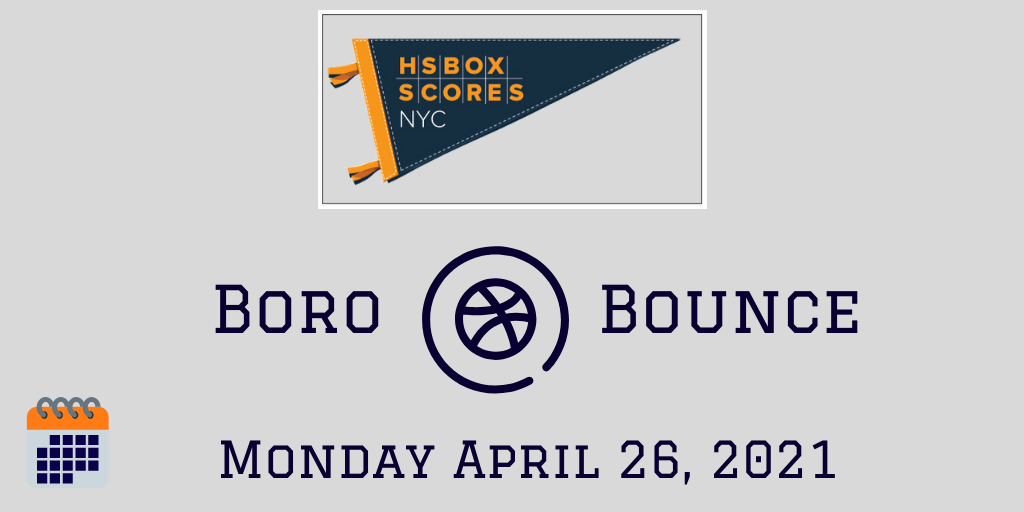 As the expression goes, better late than never. After being restrained by red tape throughout the winter months, the New York City Catholic High School Athletic Association (CHSAA) managed to salvage some semblance of a season for city catholic high school hoopers by launching a spring boys basketball tournament that got underway last week. The city catholic school teams were in proverbial no-man's land after local health officials in the surrounding counties of Nassau, Suffolk and Westchester cleared interscholastic basketball competition in February and New York City cleared outdoor PSAL play that is scheduled to start in mid-May. In addition to the fundamental safety and logistical concerns, teams participating in the tournament face roster-management issues due to the overlap of other sports seasons being crammed into the end of the school year, forcing multi-sport athletes to make a difficult choice, especially seniors.

Tournament play has been divided into four divisions. Two divisions (the Ray Nash division and the Kevin Pigott division) are comprised of teams that competed at the AA level in 2020, with the exception of Fordham Prep, while the other two divisions (the Tom Murray division and the Rich Tricario division) consist of teams that played at the A and B level last season. The top two finishers in each division will qualify for a semifinal playoff, with a Nash/Pigott champion and a Murray/Tricario champion crowned on May 27, 2021. All games will be played at Archbishop Stepinac High School in White Plains, outside of the boroughs, and livestreamed on Locallive.

The CHSAA will also hold a spring tournament for girls teams, which will tip on Friday, April 30 and run through Friday, May 21.

Monsignor Scanlan and Fordham Prep tipped the opener, with the Crusaders topping the Rams 69-47. Ray Glasgow led the way for Scanlan, scoring a game-high 26 points that included four 3-pointers, with Rich Smith adding 16. Jake Okon led the Rams with 14 points. The Crusaders will be tested on Monday night when they face St. Raymond.

The Ravens were razor sharp on both ends of the court in their opener against St. Peter's on Thursday night, topping the Eagles 68-52. Dallis Dillard scored 21 points and Elijah Castillo recorded a double-double with 17 points and 10 rebounds for St. Raymond.

Final score: St. Raymond 68 St. Peter's 52. The Ravens were sharp on both ends of the court throughout. @locallivenet @CHSAA_NYC #HSBB

Host Archbishop Stepinac, which has been playing competitively for weeks due to its locale outside of the boroughs, defeated New York Archdiocese powerhouse Cardinal Hayes 70-60 on Tuesday night. Boogie Fland scored 17 points, Isaiah Alexander had 16, Joel Baez 14 and Samuel Gibbs 12 for the Crusaders. Ian Jackson scored a game-high 23 points and frontcourt standout Tobe Awaka had 19 points and 15 rebounds for Hayes.

In a rematch of last season's CHSAA B/Q Dioscesan title game, St. Francis Prep rallied late, closing the game on a 12-3 run to top Xaverian 55-47. Todd Rochelle, who scored a game-high 21 points, was the catalyst for the late surge by the Terriers, netting 8 points in the final frame, including two key 3-pointers. Jaden Pena scored 19 points and Shawn Fulcher had 17 for Xaverian.

Todd Rochelle scored a game-high 21 points for St. Francis Prep in the Terriers' 55-47 win over Xaverian, including two clutch triples down the stretch.

Holy Cross put on a perimeter defense clinic in its 69-61 win over CHSAA B/Q rival Christ the King. The Knights' zone defense turned into a deflection-fest, sparking its transition offense. Rodney Lewis scored 23 points and Malachi Muldrow added 13 for Holy Cross, but the Knights' defense was the MVP of this game. Krist Garcia scored 21 points and Marcus Casulla added 12 for Christ the King.

Final score: LaSalle Academy 38 Cristo Rey 36. LaSalle scored the winning bucket with 10.3 ticks left. Cristo Rey had a chance to tie or win it on the last possession, but LaSalle's defense prevented Cristo Rey from getting a shot up. @CHSAA_NYC @ChsaaHigh #HSBB

Monsignor Farrell was sharp in a 69-32 win over Cristo Rey on Wednesday, a win that looks more impressive after Cristo Rey took LaSalle to the wire on Sunday. The Lions will face LaSalle on Tuesday.

St. Joseph by the Sea ran past Monsignor McClancy 71-49 on Thursday. The Vikings will be tested by Farrell on Thursday.

St. Edmund Prep closed its 40-32 win over Nazareth on Saturday on a 14-2 run. The Eagles followed that performance with an impressive 72-49 win over McClancy on Sunday afternoon.