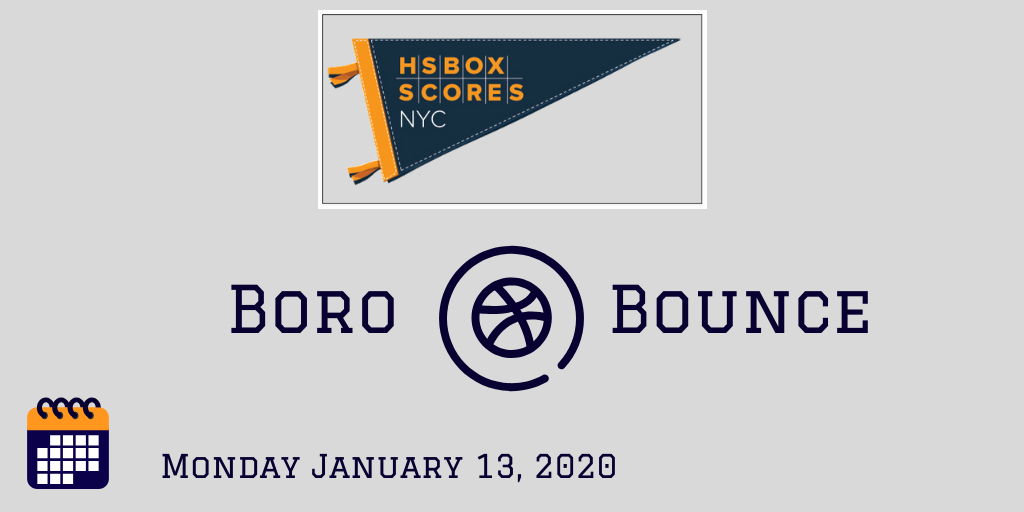 A busy week on the high school hardwood around the boroughs and beyond. Here's your update.

St. Raymond had a convincing 93-68 win over Archbishop Stepinac in a sold out affair in White Plans on Friday night. Luis Kortright led the Ravens with 33 points and North Carolina commit RJ Davis scored 23 points for Stepinac. The Crusaders are currently ranked 19th nationally in the most recent Ballislife Fab 50, while St. Raymond is ranked 44th. The Ravens avenged a 100-93 overtime loss to Stepinac on December 15th, playing both games without frontcourt standout Gary Grant, who was sidelined with an injury. Stepinac played Friday without national prospect Adrian Griffin Jr., who is recovering from a knee injury suffered in the Crusaders' win over Iona Prep on January 3rd.

St. Raymond tacked on a league road win on Sunday, topping St. Francis Prep 64-50 in Queens. Gary Grant returned to the lineup for the Ravens, scoring 13 points, while Malachi Smith had 17 and Luis Kortright 15. St. Raymond is now 6-1 in league play, tops in the CHSAA NY Archdiocese standings, a half-game ahead of Stepinac and Iona Prep.

St. Raymond gets a 64-50 road win over St. Francis Prep in Queens on Sunday. Gary Grant back in the lineup for the Ravens, scoring 13 points.#HSBB #FAB50
Link to the box score⬇️https://t.co/6lLgQgAuH1 pic.twitter.com/1Rt37AXIZk

Stepinac suffered an 81-68 non-league setback to Rutgers Prep at the Empire Invitational on Sunday, but RJ Davis took the headline anyway, becoming Westchester County's all-time leading scorer in the loss, tallying 32 points to give him a total of 2,121 for his high school career. Davis surpassed previous Westchester County record holder Danya Abrams, who held the honor for almost 27 years.

Iona Prep earned two solid league wins last week, a 66-59 road victory over Holy Cross on Tuesday night and an 82-62 home win over Christ the King on Friday night. RJ Greene scored 23 points against Holy Cross and 16 against Christ the King. Although the Gaels suffered an 85-81 setback against Jefferson at the Empire Invitational on Saturday, Iona Prep is now tied with Stepinac for the second spot in the CHSAA NY Archdiocese league standings at 5-1, a half-game behind St. Raymond. The Gaels have two league tests this week, Monsignor Scanlan on Tuesday and St. Raymond on Friday, both games in New Rochelle.

Cardinal Hayes improved to 5-3 in league play, notching wins over Mount (80-70) and at Archbishop Molloy (66-62) last week. Julien Soumaoro scored 24 points for Hayes in the win over Molloy. The Cardinals dropped a non-league contest to NYSAIS power Albany Academy on Sunday, falling to the Cadets 61-51 at the Empire Invitational. Congratulations to Hayes head coach Joe Lods, who now has more than 250 career wins. The Cardinals will visit Xaverian on Friday and Monsignor Scanlan next Monday.

Xaverian was listed as a bubble team in the last Fab 50 national rankings, but the Clippers, who were emerging as one of the teams to beat in the boroughs, suffered a perplexing 54-53 overtime loss to Holy Cross on Friday night in Flushing. Tyler Chapman led the Knights with 15 points.

CHSAA Varsity Basketball Final In OT the Knights defeated Xaverian by a score of 54 -53 Tyler Chapman had 15 and Alan Rodriquez had 13 to lead the way Great home win for the Knights GO KNIGHTS!

Despite the loss, Xaverian still holds the top position in the CHSAA Brooklyn-Queens standings with a league record of 5-2. The Clippers, who bounced back with a 60-47 non-league win against Rome Free Academy on Sunday, are the only team in the CHSAA B/Q standings with a league record above .500. Nick Folk scored 18, Elijah Hardison 16 and Shawn Fulcher 13 in Xaverian's win on Sunday.

St. Francis Prep earned a 63-56 road win at Bishop Loughlin on Tuesday night, with Todd Rochelle registering 18 points for the Terriers and Taj Chiles scoring a game-high 21 points for the Lions.

St. Francis Prep is 2-4 after dropping Sunday's home game to St. Raymond, while Loughlin is also 2-4 after a Sunday road loss at Molloy, who improved to 2-3 in league play. Holy Cross (2-5) and Christ the King (1-5) round out the CHSAA B/Q standings. The Royals took Rancho Christian (CA) to the wire before falling 77-74 in their second game of the season on December 7th, but have gone 2-5 since then, managing just one league win, edging Loughlin 54-52 in Brooklyn on January 3rd. Meanwhile, Rancho Christian is currently ranked 17th nationally in the Fab 50. The Royals will take on Vashon High School (MO) in the opening round of the the Bass Pro Tournament of Champions at Missouri State University on Thursday, and it was announced that Christ the King will be inducted into the tournament's Hall of Fame this weekend.

2020 #TOC Hall of Fame inductee @ctkcoachjarbs @ctkroyals The Christ the King basketball program will be inducted on Saturday night of this years tournament. Congrats! https://t.co/h35uP9raem

St. Peter's earned a quality road win in the Bronx on Sunday, defeating Monsignor Scanlan 88-69. Liam Murphy scored 35 points for the Eagles. After winning 5 of 6 games, Scanlan has now dropped three straight league contests, all at home, and 4 of their last 5 games overall. The road will not get any easier for the Crusaders, who will visit Iona Prep and St. Raymond this week.

Cardozo remains unbeaten at 16-0 after lopsided league wins over QHST and Beach Channel and non-league wins over Samuel Gompers (76-44) and Baldwin (50-42) over the weekend. Errol White and Aaron Miller continue to rack up double-doubles for the Judges. White scored 20 points and grabbed 11 rebounds in the win over Gompers while Miller had 17 and 10. Cardozo has started to garner national attention, coming in at 45 in the last Fab 50 national rankings.

WHEELS has suddenly turned into one of the hottest teams in the boroughs, taking down John Bowne 66-62 in Queens on Saturday. Jerimiah Davis scored 29 points with six 3-pointers and Randy Crosby scored 19 of his 23 points in the second half for the Wolves, who are the only team to defeat PSAL Brooklyn AA leader Brooklyn Collegiate this season. WHEELS is 6-3 in the PSAL Manhattan AA Division, with league losses to Manhattan Center, Wings Academy and Thurgood Marshall Academy. The Panthers, who hold the top spot in the PSAL Manhattan AA standings with a league record of 9-0, had a 15-point third quarter lead dwindle to a single point in a home game against Wings on Friday night, but held on to defeat the PSAL Bronx AA power 67-66. Kevin Dinkins Jr. led TMA with 21 points and Jose Cuello had 18 for Wings.

Wings recovered from Friday's loss with a 64-54 non-league win over Ranney School (NJ) at the Empire Invitational on Sunday. Jay Shayne Woodward scored 20 points and had 7 rebounds for Wings.

Brooklyn Collegiate continues to hold the coveted top spot in the PSAL Brooklyn AA, notching league wins at home over Jefferson (95-66) and a 70-69 squeaker over Lincoln last week to bring their league record to an unblemished 9-0. The Lions, listed as a bubble team in the current national Fab 50 rankings, tacked on a convincing 92-84 non-league win over Park School of Buffalo at the BK Post Invitational on Sunday, with Amahrie Simpkins scoring 24 points, Tahron Allen scoring 23 and Majesty Johnson 18 in the win.

Khalil Brantley continues to put up big numbers for Boys & Girls, netting 37 points for the Kangaroos in their win over Canarsie on Thursday and 44 points in a 72-66 non-league setback against Park School at the BK Post Invitational on Saturday. A'mag Tate scored 32 for the Chiefs in Canarsie's loss to Boys & Girls. Despite the loss to Park School, Boys & Girls still shares the second spot in the Brooklyn AA standings with South Shore at 7-2. The Vikings took care of business last week with three league wins over Westinghouse (72-51), Eagle II (65-53) and Canarsie (70-55). The Chiefs are 4-5, while Jefferson and Eagle II are both 2-6 and Westinghouse is winless in eight league tries. The Orange Wave showed some fight in two non-league contests over the weekend, topping Iona Prep 85-81 on Saturday and dropping an 81-80 thriller to Holy Trinity (LI) on Sunday. Jaquan Carlos scored 35 points in the win over Iona Prep.

Kateri Poole recorded a quadruple double for South Shore in the Lady Vikings' 62-25 win over Truman in a rematch of last year's PSAL championship on Wednesday. Poole scored 13 points, had 11 rebounds, 10 assists and 10 steals. South Shore is currently ranked 4th nationally by MaxPreps. In other girls hoops action, Xaverian edged Christ the King 62-57 in overtime on Thursday.

Stevenson edged KIPP Prep 53-50 on a dramatic buzzer-beating 3-pointer by Elijah Gomez on Wednesday, a shot that rivals Khalil Brantley's 3-point heave against Brentwood for shot of the year so far.

Stevenson dropped an 74-54 contest to Seward Park at the BK Post Invitational on Saturday.

KIPP bounced back after suffering its first league loss on the Perez buzzer-beater with a 64-55 overtime win over Evander Childs on Friday, but were defeated by Benjamin Banneker 73-56 at the PSAL A Division showcase on Saturday. Gabriel Holley scored 26 points and had 7 assists for Banneker. Playing their third game in three days, KIPP earned an impressive 61-53 win over PSAL Queens AA contender Francis Lewis at the BK Post Invitational on Saturday. Murry Bergtraum topped Rome Free Academy 84-60 at Saturday's event in Greenpoint, with Dior Davis leading the Blazers with 23 points.

Uncommon Charter suffered its first loss of the season on Saturday, falling to Green Tech 52-50. The Sabers are 9-0 in PSAL league play, tops in the Brooklyn B East Division. Defending PSAL B champs South Bronx Prep are also unbeaten in PSAL league play at 10-0 atop the Bronx B3 Division. The Cougars have not taken the court since December 20th, but will return to action on Wednesday, when they face Bronx Early College.

Salesian remained unbeaten in CHSAA B Division play at 5-0 by edging Regis 65-62 in a rematch of last year's championship game in Manhattan on Friday night. Camar Neil scored 27 of his 32 points in the second half to lead the Eagles, who trailed most of the game.

Salesian overcame a 34 point performance by Joe Manfredi of Regis, who surpassed the 1,000 point career milestone late in the fourth quarter. Manfredi is just the third player in Regis history to register 1,000 career points. Regis was founded in 1914.

Max Egner became the first player in Maspeth High School history to net 1,000 career points, attaining the honor in a 27 point 16 rebound performance in Maspeth's win over Frank Sinatra School of the Arts on Thursday. Maspeth is 8-1 in league play, tied with American Studies for first place in the PSAL Queens B West Division.