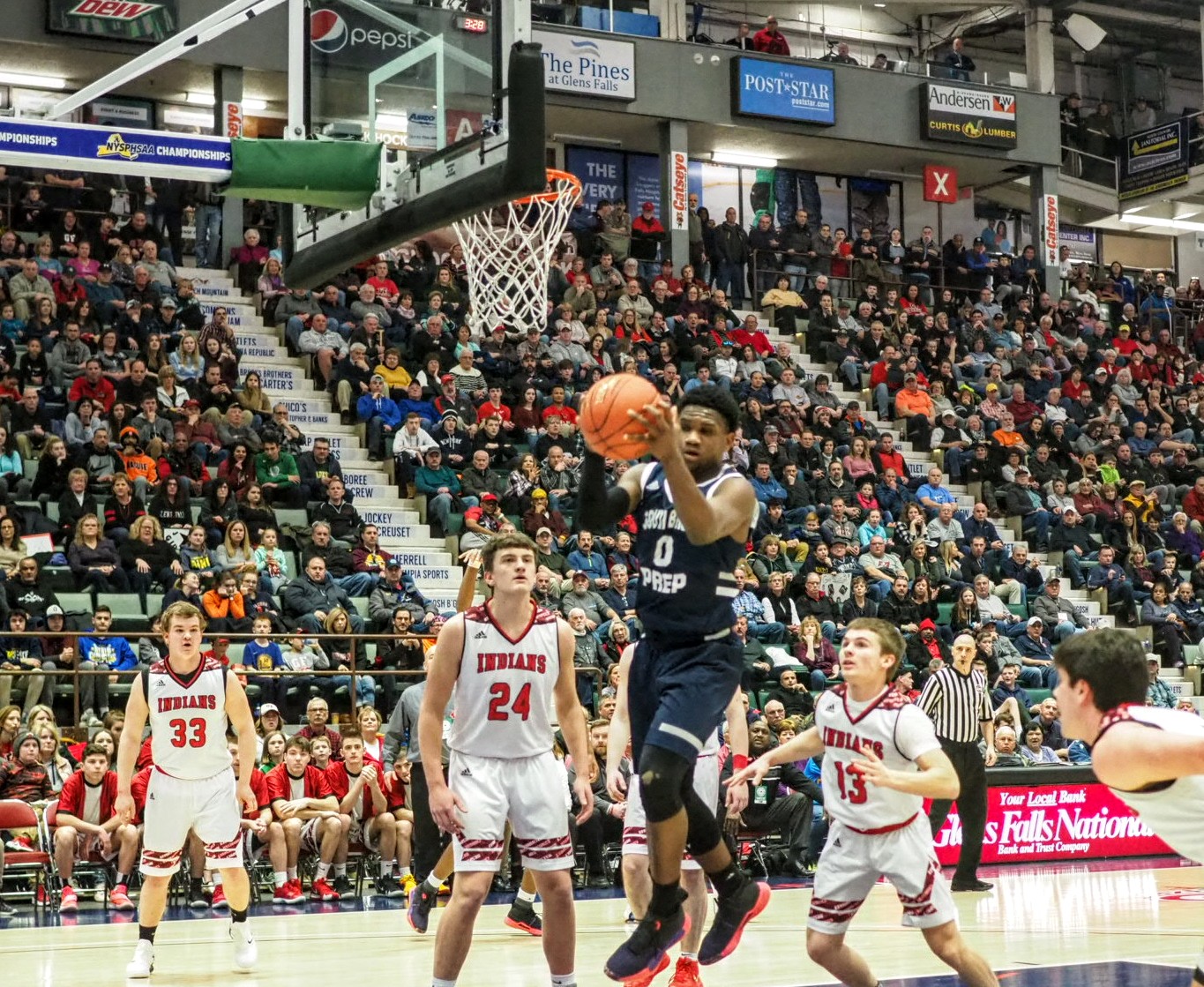 In a scene that resembled a version of Hoosiers, this one near the Hudson rather than Hickory, Glens Falls was energized by a passionate hometown crowd packed into the Cool Insuring Arena. The local hype for the game was so significant it caused the New York State Federation to change Saturday's program to avoid a general admission ticket binge that could have shut out friends, families and fans from seeing their own schools play in the other games.

If you are here to see @GFSDathletics you will have to wait on a line 3 blocks long. This is the start of it to see @JG3_____ and company take on @SBPrepHS. @eliovelez @Joe_Staszewski pic.twitter.com/tx8Lo7ZPp9

Girard led his team onto the court and was instantly greeted with a roar from the crowd so loud that it momentarily muzzled the cheerleaders and pep band lined up beneath the basket next to the Glens Falls bench. South Bronx Prep strutted onto the court next, led by Head Coach Paul Campbell, exuding a calm and determined demeanor.

The Cougars were sharp out of the gate, opening the game on a 7-0 run and leading by as many as 13 in the first half, with Tristan Cannady scoring from the perimeter and Jordan Agyemang in the paint. Although Girard made just 13 of 39 shots against South Bronx Prep's pressure defense over the course of the game, he gave the Indians just enough offense over the first 16 minutes to keep them within striking distance. With Girard drawing double and sometimes triple teams away from the basket, Glens Falls was also able to get points on the offensive glass, with David Barclay and Nick Danahy both converting putbacks. The Cougars took a 37-29 lead into the locker room after Maynor Calix followed-up a halfcourt heave by Elijah Avila just ahead of the halftime horn.

South Bronx Prep struggled from the free throw line early in the third quarter, missing four straight chances from the stripe that could have put Glens Falls back on the ropes.

With the Indians hanging around, Girard's deep 3-pointer with 4:00 to play in the quarter trimmed the margin to 44-39, and although Steven Turner answered for South Bronx Prep on the next trip, the play triggered a momentum shift in favor of Glens Falls. Turner converted a drive in the lane despite being body checked to the floor with no foul called, and he was whistled for a technical for taunting Girard after the bucket. The call would prove to be costly for the Cougars, as Turner would later foul out with 1:14 to play in regulation, sidelining him for the final minute and the entire overtime session. Glens Falls went on to outscore the Cougars 23-15 in the third, pulling within a bucket at 52-50 heading into the fourth.

The crowd erupted when Glens Falls took a 53-52 lead on a 3-pointer by Girard on the first possession of the fourth, but a series of lead changes kept the local faithful on the edges of their seats before JGIII put the Indians ahead 66-62 on a chest-first double clutch in the lane. South Bronx Prep would come back to tie the score at 66 on a huge 3-pointer by Cannady, but Trent Girard gave Glens Falls the lead back with two free throws at the 1:14 mark, with Turner fouling out on the play. This left the Cougars without two of their starters at crunch time, with Agyemang, who recorded a double-double with 18 points and 16 rebounds, having already fouled out.

Although South Bronx Prep made just 13 of 24 from the stripe in the game, Cannady connected on two clutch freebies with 38.5 seconds left to knot the score at 68. Glens Falls held for the last shot in the closing seconds, but Girard missed a long 3-pointer and South Bronx Prep secured the rebound and called timeout with 2.2 ticks on the clock, giving them a chance to win it. The Cougars failed to get a shot up on the final trip, sending the game into overtime.

Glens Falls took a 73-68 lead on a corner 3-pointer by Trent Girard, but a driving score by Eric Davis kept South Bronx Prep's hopes alive, making it a one possession game at 73-70. Unfortunately for the Cougars, those were the last points they would score. With Turner and Agyemang on the bench, Glens Falls outscored South Bronx Prep 9-2 in the extra session, earning the crowd-pleasing 77-70 overtime win.