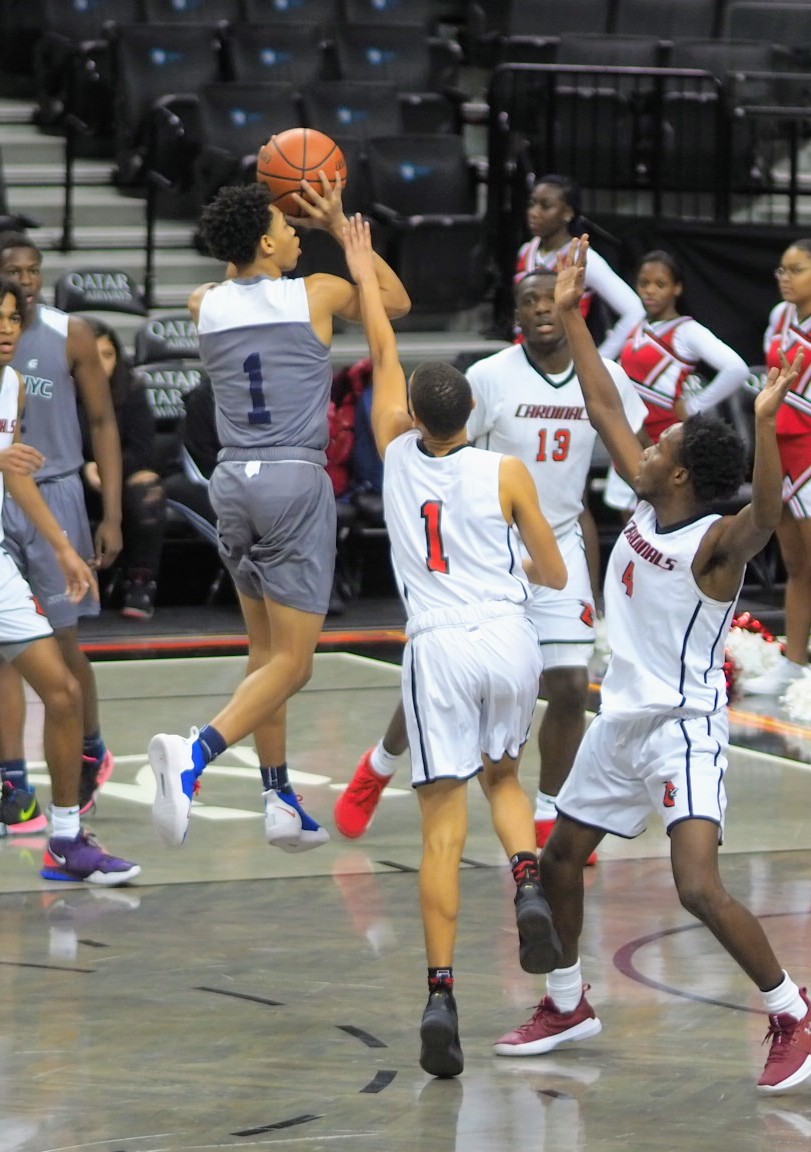 Damir Brooks scored 21 points and Herbert Hawkins added 20, as KIPP Prep withstood a late rally by Van Arsdale and edged the Cardinals 58-57 in a Class A PSAL non-league clash at the Barclays Center in Brooklyn on Friday night.

KIPP pulled in front 9-7 after Hawkins connected on a 3-pointer well beyond the NBA line with 3:25 to play in the opening quarter, and the Bulldogs never relinquished the lead after that.

KIPP took its biggest lead of the game at 35-21 after Hawkins hit another triple and connected on a long two, and the Bulldogs held a comfortable 36-24 advantage at the half.

Van Arsdale narrowed the margin late in the third. After Brooks put KIPP ahead 44-34 on a one-handed slam, the Cardinals rattled off six straight straight points and trimmed the deficit to 44-40 on an and-1 by Naje Flowers.

Milo Scheve's layup just ahead of the horn at the end of the third made it a one possession game at 45-42 heading into the final frame.

KIPP pushed the lead back to nine at 51-42 after a two-handed follow-up slam by Brooks with 6:00 to play, but Van Arsdale fought back again.

Back-to-back baskets by Jaheem Tyson made it 55-52 with 2:00 to play, but with the shot clock apparently not in effect on the big stage, KIPP burned over a minute off the clock on the next possession before a Brooks layup made it 57-52 with less than a minute left.

Tyson's 3-pointer with 25 seconds remaining cut it to 57-55, but Van Arsdale was in a must-foul situation and still had fouls to give before triggering the bonus.

Precious ticks ran off the clock before Hawkins was finally put on the stripe with just 7.6 seconds left. He made one of two to make it 58-55, giving Van Arsdale a chance to tie the game on the final possession. Rather than going for a three, Tyson drove the lane and converted his miss as time expired.

Tyson finished with 19 points, Flowers had 16 and Scheve 10 for Van Arsdale.

Damir Brooks scored 21 points and Herbert Hawkins had 20 for KIPP. Jaheem Tyson had 19 points and Naje Flowers had 16 for Van Arsdale.#PSAL #HSBB
Link to the box score⬇️https://t.co/LT7hkFd3Bs pic.twitter.com/ckVfd51jZ1

KIPP is currently ranked 8th in New York State and 4th in New York City by the New York State Sportswriters Association among Class A schools. The Bulldogs are 9-0 in the PSAL Bronx A Central standings. Their next league contest is on January 6th, when they will host Taft.

Van Arsdale is 5-3 in the PSAL Brooklyn A5 Division. The Cardinals will visit Automotive on January 6th.