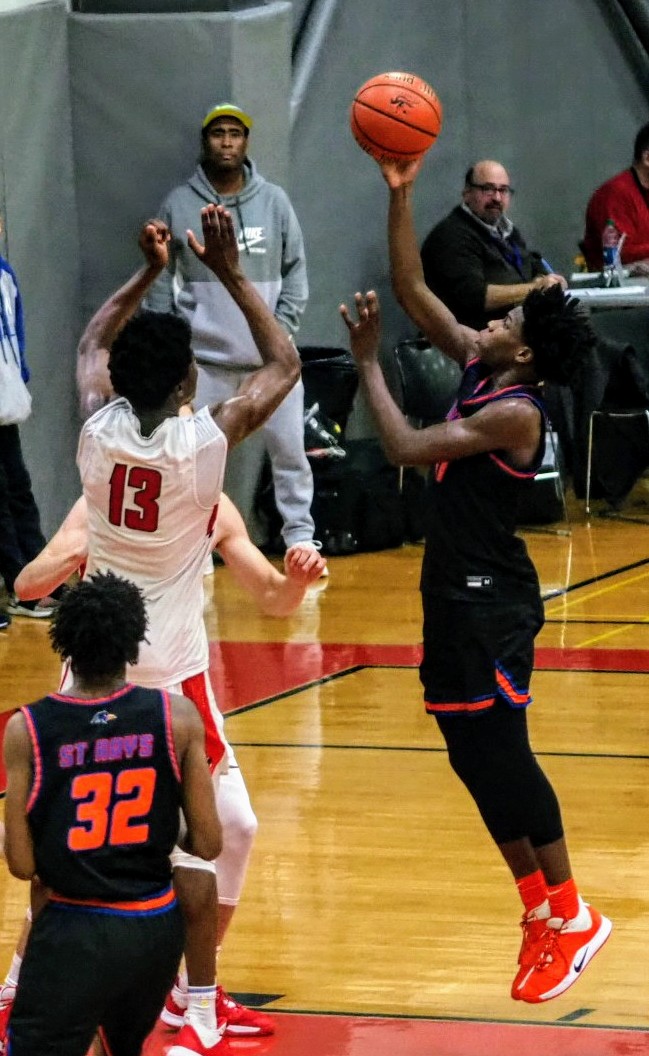 Long Island Lutheran cruised to a convincing 91-64 win over CHSAA contender St. Raymond in the finale of the Shooting Stars showcase event in Brookville on Saturday. St. Raymond struggled to navigate LuHi's lockdown matchup zone, as the Ravens managed just 7 points in the opening quarter, while LuHi, behind Andre Curbelo, Zed Key and Drissa Traore, put up 20. Luis Kortright and Malachi Smith combined for 12 of St. Raymond's 16 second quarter points, but Curbelo scored 8 of his 12 points in the frame, and LuHi opened up a 43-23 lead at the half.

St. Raymond tried to press their way back into the game in the second half, but LuHi handled the pressure and got the ball to Key and Traore downcourt for easy looks. Key scored 15 of his game-high 25 points and Traore scored 10 of his 16 in the last 16 minutes. Kortright finished with 19 points, while Smith scored 15 and Reggie Hudson 12 for St. Raymond.

Final score: LuHi 91 St. Raymond 64. Crusaders with a convincing win, cruising most of the way. Below: Drissa Traore to Zed Key. #HSBB pic.twitter.com/K3ZoaEJPQ6

LuHi is currently ranked as the top team in New York and has won 22 consecutive games against opponents in the Empire State, a streak that includes the Crusaders' 2019 New York State Federation Championship, where they defeated PSAL champs South Shore in the semifinals and CHSAA titleholder Christ the King in the final.

St. Raymond, currently ranked 4th in New York State, has now lost consecutive games for the first time this season, dropping a 69-67 contest to New Jersey power Bergen Catholic on New Years Day. The Ravens have a non-league game against Dwight Englewood on Sunday and will return to CHSAA league play on Friday, when they will visit nationally-ranked Archbishop Stepinac. The Ravens took Stepinac to the wire on December 15th before falling in overtime 100-93.

Stepinac topped rival Iona Prep 62-54 in a spectacular setting at the Westchester County Center on Friday night, but Duke commit Adrian Griffin Jr suffered a knee injury in the game and, according to Adam Zagoria, is day-to-day pending an exam.

* This post has been corrected to report that St. Raymond's opponent on Sunday January 5th was Dwight Englewood. An earlier version of this post indicated that the opponent was Dwight School of the NYSAIS.