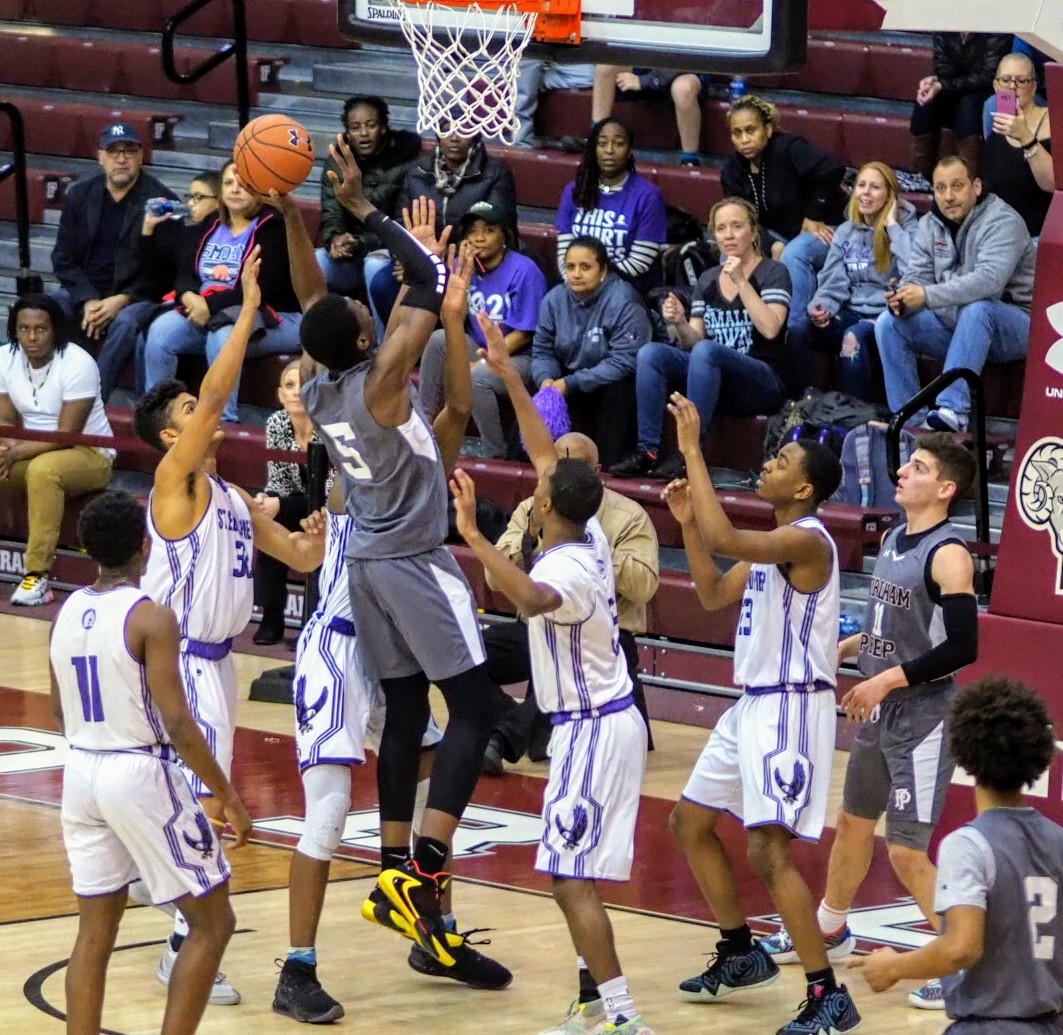 Fordham Prep outscored St. Edmund Prep 20-8 in the third quarter, setting the stage for a historical 60-49 triumph over the second-seeded Eagles to capture the CHSAA A Division championship at Rose Hill Gym in the Bronx on Friday night.

Although it was Fordham Prep's fourth straight trip to the CHSAA A Division final, the last city championship for the Rams in basketball came on March 9, 1933, a 20-19 win over Bishop Loughlin played at DeGray Gymnasium in Brooklyn, then the home court of St. John's. The 1933 title game was played the same night Congress passed the Emergency Banking Act during the Great Depression.

Box score from Fordham Prep's last city championship on March 9, 1933. Game was played at DeGray Gym, then the home court of St. John's. Also in the 3/10/33 newspapers: Congress passed the Emergency Banking Act in response to the bank runs during the Great Depression. #HSBB https://t.co/DNAYS6Zd8O pic.twitter.com/rls6ZMhVAN

Ryan McPartlan led the Rams with 16 points, going a perfect 10-10 from the free throw line, but Fordham Prep's defense was the star of the game. The Rams held CHSAA A Division MVP Shemar Latty, who averaged 19.5 points per game during the regular season, to just 8 points on 4-17 shooting, and held the Eagles scoreless over the last 4:00, closing the game on a 10-0 run.

Fordham Prep jumped out to a 17-13 lead after the first frame, with McPartlan sparking the offense by converting two conventional 3-point plays and Nate Boateng guarding the paint, rejecting two early St. Edmund Prep attempts on drives into the lane.

The momentum shifted in the second, as Boateng went to the bench after being whistled for two personals. St. Edmund Prep took advantage, outscoring the Rams 16-8, with Cameron Shields and Malik Cole getting points on the break and in the paint, giving the Eagles a 29-25 halftime lead.

Halftime: St. Edmund Prep 29 Fordham Prep 25. Eagles getting points on drives through the lane with Nate Boateng of Fordham Prep sitting most of the 2nd Q with 2 personals. Below: drive by Cameron Shields of St. Edmund Prep. @CHSAA_NYC @SEPAthletics @FP_Hoops #HSBB pic.twitter.com/WSosH5gcrz

The momentum shifted again with Boateng back on the floor in the second half. After Latty tied the game at 37 on a crossover drive, Fordham Prep closed the quarter on an 8-0 run that started with a triple by Jake Okon and ended with a 3-pointer by Alex Russo, giving the Rams a 45-37 lead heading into the fourth.

End of 3rd Q: Fordham Prep 45 St. Edmund Prep 37. Alex Russo triple at the end of the 3rd has the Rams up 8 heading into the final frame. @CHSAA_NYC @FP_Hoops @SEPAthletics #HSBB

It looked like the game would go down to the wire when St. Edmund Prep pulled within a point at 50-49 on a 3-point play by Shields with 4:00 left, but those were the last points the Eagles would score. With two chances to take the lead while trailing 50-49, St. Edmund Prep came up empty on both possessions. Fordham Prep scored the last 10, sealing the game from the line, as the Rams scored 12 of their 15 fourth quarter points from the stripe and went 20-23 on free throws for the game.

Russo and Okon finished with 10 points each, while Boateng scored 9 with 7 rebounds and Mark Osime scored 8.

Fordham Prep was founded in 1841 and was among the earliest New York City schools to field a scholastic team. A photo of the Fordham Prep basketball team was included in Spalding's Official Basket Ball Guide for the 1903-04 season, together with the team's schedule and game results. 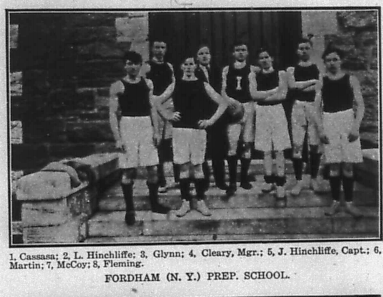 Other New York City high schools referenced in the 1903-04 Spalding's Guide included DeWitt Clinton (then located in Manhattan) and Flushing. 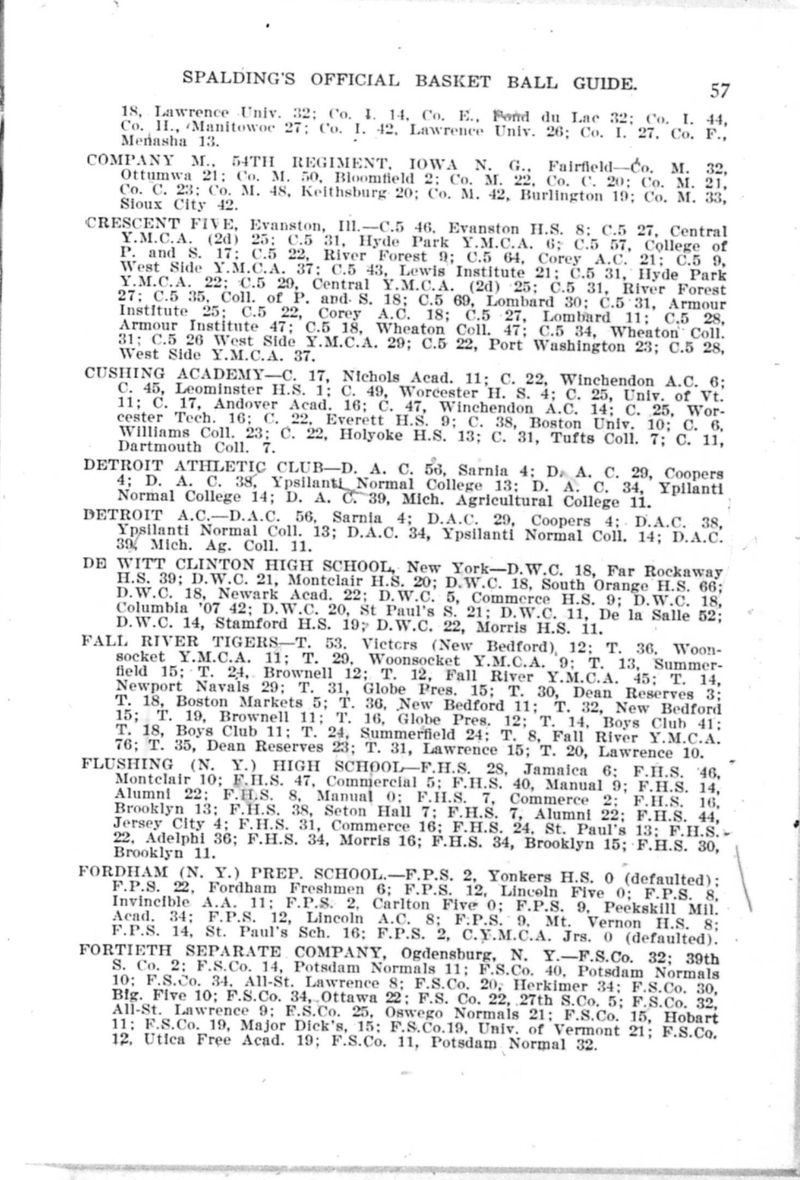